Despite its adorable sidewalk cafes, Paris is not where one goes for a good cup of coffee. You’ve been warned :)

The first time I went to Paris, I was looking forward to sitting nonchalantly at a quaint sidewalk cafe, people watching or perhaps sitting with some new found Parisian friends. Well, it turns out Parisian cafes are eminently charming… but the coffee leaves a lot to be desired.

Maybe it’s because I didn’t know what to order, or maybe the French cafes have improved in the years since, but luckily, on my next trips to Paris I found the coffee in France was slightly better. The French coffee scene is growing and while many traditional sidewalk cafes stick to the classics, you can get high quality beans at the more hipster spots in town.

Here’s a guide to French coffee drinks so you’ll know how to order your drink of choice!

While France is certainly a café culture, it’s not quite a coffee culture.

What do I mean by that?

French cafés were once a huge part of French culture and society. Artists, philosophers and literary greats met each other at these open air side tables and lingered for hours, debating, socializing and writing.

But while the company may be great, the coffee is a bit mediocre. Here are the most common types of coffee drinks you can try in France.

The French standard is un café, a small cup of strong black coffee. It’s essentially equivalent to an espresso with nothing else added.

Sometimes the server might notice you’re a foreigner and want to clarify that you’re looking for an espresso.

You can of course order this at any coffee shop in France and it’s also quite common to end a meal with un café, a shot of espresso – to aid digestion. Need a double or something stronger? You can ask for un café serré, or un double café.

If you ordered the espresso (un café) and didn’t realize it would be served black, you can ask the waiter for “du lait, s’il vou plait” meaning, “some milk, please!”

Or – you can get the milk upfront by ordering un café au lait, meaning a basic coffee with milk. Usually this is served as a shot of espresso accompanied by a side pitcher of steamed milk where you pour it in, to taste.

If you’ve ever been to New Orleans, you’ve probably tried the French Creole version at Cafe du Monde! 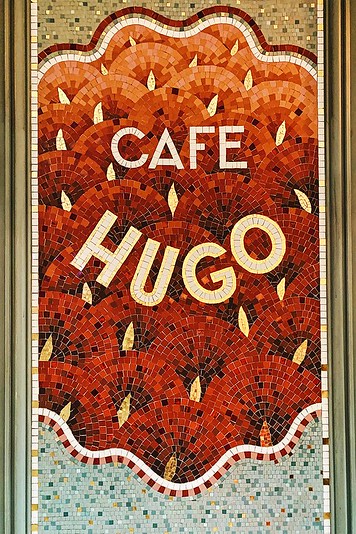 If you prefer cappuccinos, un café crème is the closest French equivalent: a coffee with a heavy pour of foamy cream.

This particular coffee drink is known as a breakfast drink in France. It’s typically served in one of those large mugs that’s perfect to wrap your hands around.

Parisians love to dip in day-old baguettes or croissants into it as they sip!

Une noisette is the French term for an Italian macchiato. It’s one shot of espresso with a drop or two or cream and served in the same espresso cup that a basic café is served in.

Anyway, this drink is named for the lighter caramel shade that occurs when cream is added to black espresso. Noisette means hazelnut in French.

It used to be that Americans only drank filtered coffee – the kind you’d find at a 24 hour diner or like the inexpensive Mr. Coffee machine you might make at home.

The French don’t typically drink this but they do offer it! They call it un café filtré (filtered coffee) but more commonly refer to it as un café Américain, or an American coffee.

Unfortunately, they won’t offer a free refill in France :( 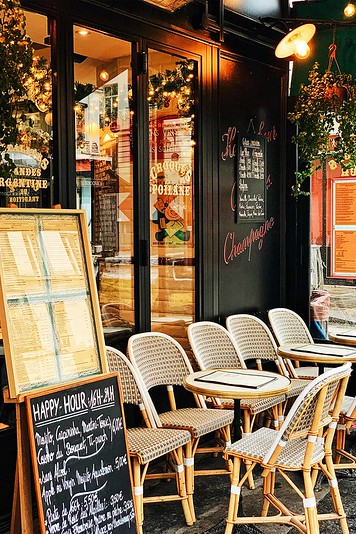 Similar to an Americano, un café léger or a café allongé is a ‘light’ espresso. It’s similar to an Italian lungo and is the French preference for a lighter coffee.

The drink is a shot of espresso pulled with double the amount of water, to give that watered down, lighter taste.

I suppose you could call it an Americano but this is the refined European version ;)

This is an iced coffee.

This is a bit fancy for the standard coffee shop in France! You might not be able to order this unless it’s summer or you’re at a trendier type of coffee shop.

Like in New York, Parisians will drink coffee at any time of day. If you’ve been invited to meet at a coffee shop right before dinner and don’t need a third shot of espresso, this is the drink to order.

Un café décafféiné is simply a decaffeinated espresso. Order like a local and abbreviate the word to just un déca.

Prefer a decaffeinated other type of coffee? You can add the word déca to any other French coffee drink by saying un café américain déca or un déca au lait.

How to Order Coffee in France Like a Local

The French believe meals should always be eaten sitting down at a table. Take away is not “the done” thing in France. And heaven forbid if you eat while walking the streets or in a subway car!

The same rules apply for coffee. Typically, coffee is enjoyed in the home, at a bar or in a coffee shop. Do as the French and sit at a sidewalk cafe, drinking with proper glassware, as if you have all the time in the world.

Some cafes, especially the popular or trendier ones, may bill you separately depending on where you sit. Drinking at the bar is cheapest, followed by an indoor table and then an outdoor table. A classic French cafe won’t do this though (usually just the touristy, pretty sidewalk cafes). Occasionally, there may even be a cover charge.

If you do spot a small coffee stand, you can ask them if they offer coffee in paper cups by specifying un café à emporter? In French, emporter means to bring away.

Milky Coffee Only in the Morning

The French see a lattés or crème as a breakfast drink, where sometimes they even dip croissant into the cup. Past breakfast, they won’t order milky coffee after a meal.

An espresso is the main drink of choice in France and can be had throughout the day on its own. It’s also common to take an espresso after a heavy meal, as a digestive, instead of dessert. Want to make an espresso taste great? Drop in one sugar cube and voila! The tiny bite of sugar will counteract the bitterness of the espresso for the perfect pick me up.

If you have a sweet tooth, you can ask for more sugar by saying plus de sucre, s’il vous plaît.

Have you had coffee in France? Is there a Paris cafe that you’d recommend?

We took a red eye to Paris from JFK. You can find cheap Paris flights from low cost carriers almost all year round – check for flight deals here.

Paris has some of the best museums in the world. I spent an entire summer living in the city, visiting different churches, museums and historic homes and still couldn't get enough. If you plan to sight see, look into a Paris Pass – it's a great value! The pass can be purchased for multiple days and allows you to skip the line at 60+ attractions. See the full list of included sights and attractions here.

Lastly, be sure to visit Paris with travel insurance. Whether you get injured and need to be hospitalized, your phone gets stolen, or a flight delay leaves you with nothing but the clothes on your back, travel insurance will help when you need it most. During our recent trip, riots in Paris shut down the city center and forced a closure of all the main sights (the Louvre, Versailles, etc). Get a quote for your trip here.

What to Wear in France (to Blend in with Chic Parisians!)

Where to Stay in Paris

The Best Airbnbs in Paris

Cozy Airbnbs with a View of the Eiffel Tower