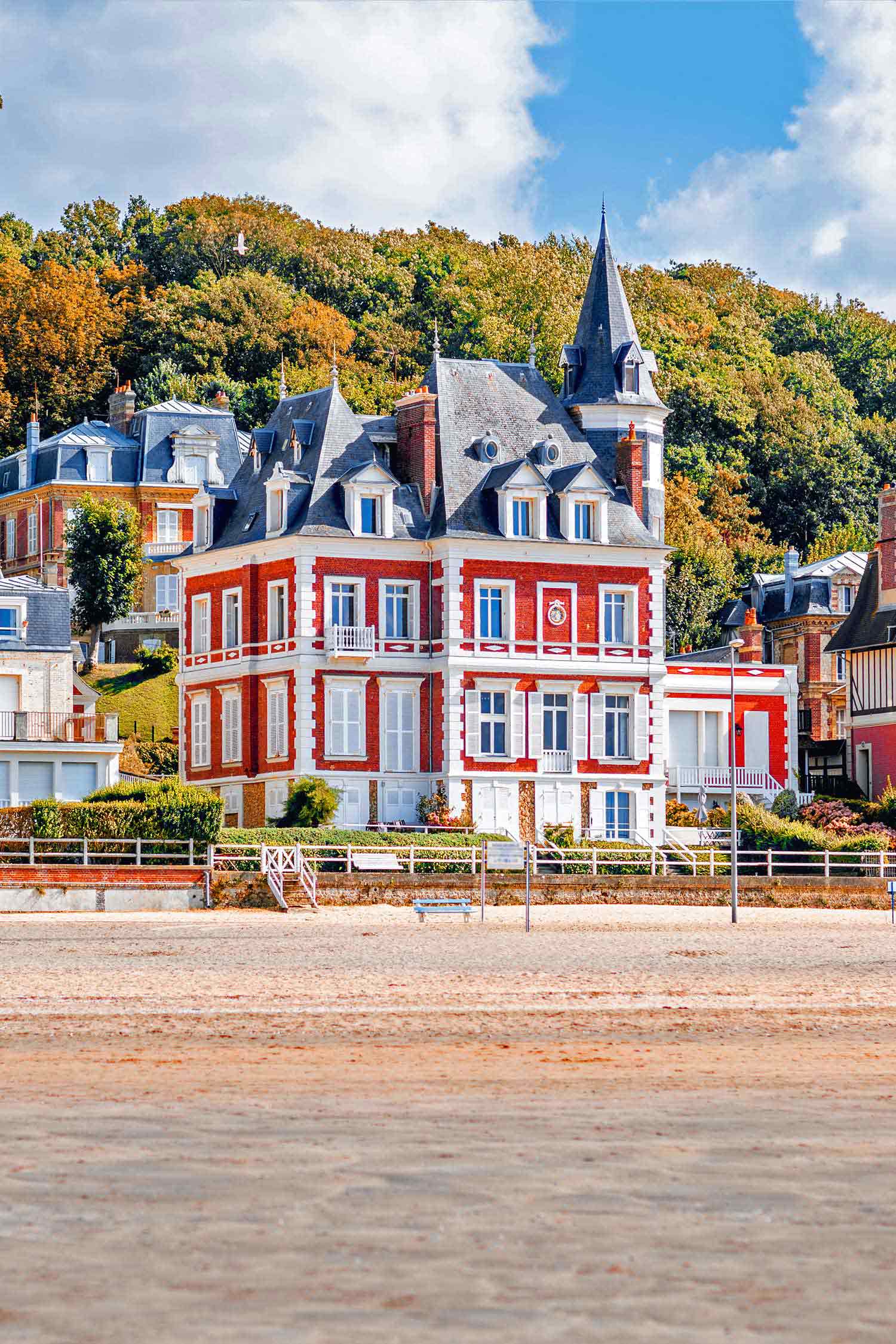 With its romantic coastline and idyllic countryside, it’s easy to see why Normandy inspired the early Impressionist painters.

Claude Monet in particular painted several towns throughout northwestern France: the colorful garden of his home town in Giverny, the dramatic cliffs in Etretat and the weighty Gothic cathedral of Rouen – just to name a few.

Whether you love Impressionist art or prefer a digital camera as your medium, there are plenty of towns and landscapes throughout northern France to inspire you.

Keep reading for some of the most beautiful places in Normandy, France! 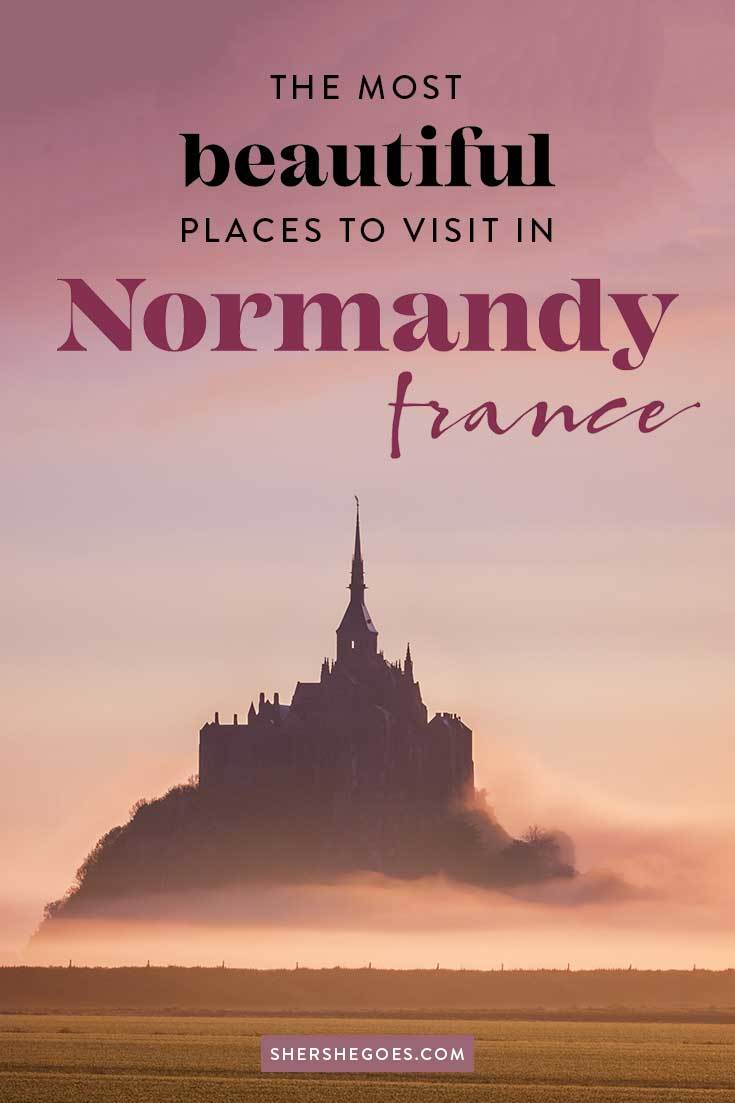 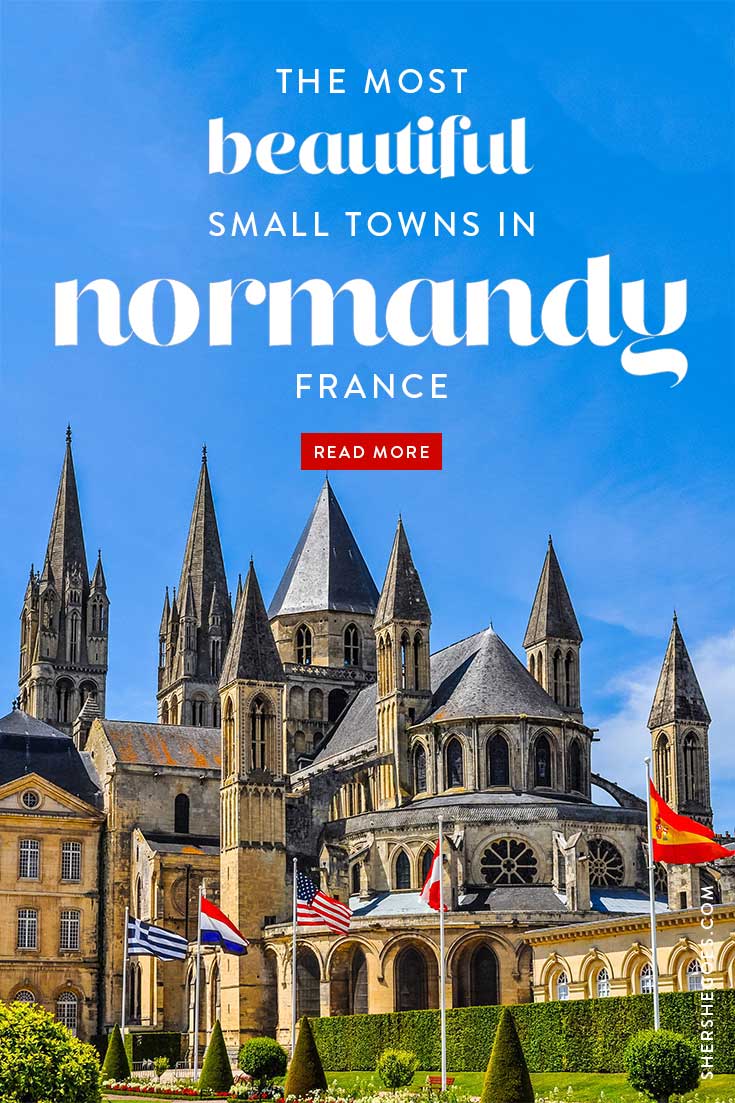 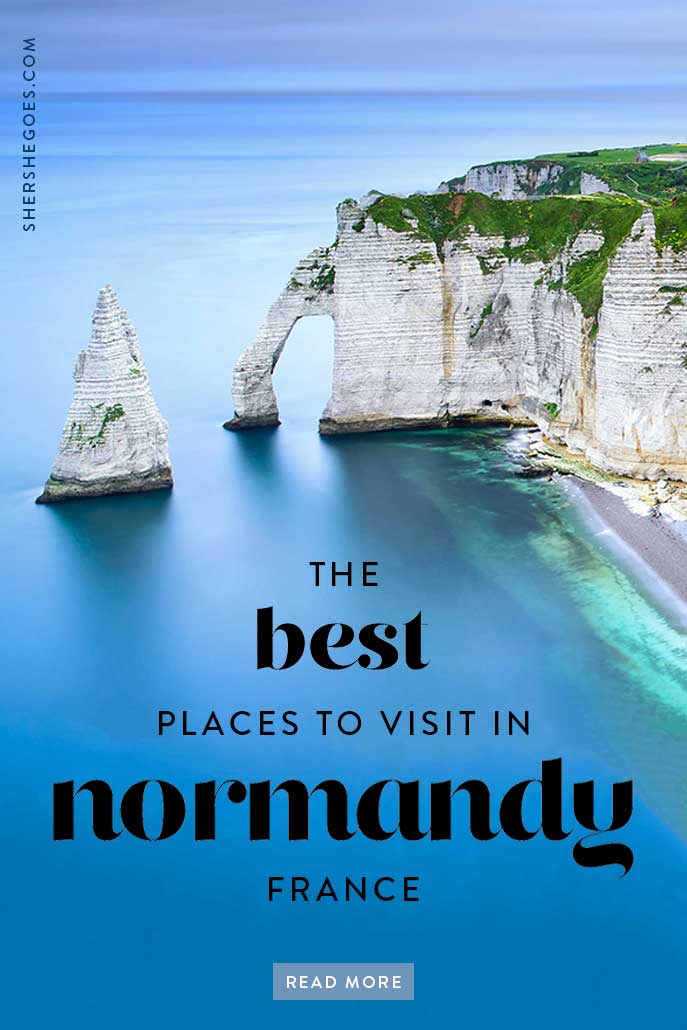 Normandy spans France’s northwest corridor, bordering the English Channel. Thanks to its geography, you can visit seaside escapes and dramatic cliff towns along the coast as well as pastoral fields and colorful Medieval towns in the interior.

In particular, Normandy is known for its half-timbered homes, Gothic churches, medieval castles and historic Abbeys. Many of the towns in Normandy were devastated by World War II – some have been restored to reflect their ancient heritage while others were dramatically rebuilt in a more modern fashion.

The result makes Normandy one of the most unique regions in France. Here are our picks for the most beautiful villages in Normandy!

Read more:  20 of the Best Things to Do in Normandy!

Rouen is Normandy’s largest city and the mixes modern-day with a medieval past. The Old Town is easily identified by the cathedral of Notre Dame, where Richard the Lionheart is buried.

Wander the windy cobblestone streets a bit further and you’ll find a gorgeous astrological clock as well as the church which marks the spot Joan of Arc was burned at the stake.

Read more:  Everything You Must Do in Rouen

Caen is one of two popular towns in Normandy from which to see the D Day beaches. Founded by William the Conqueror and later heavily damaged in the Battle of Normandy, Caen today retains a medieval chateau and excellent WWII museums along with modern hotels, restaurants and shops.

Nearby Bayeux is the other town close to the Landing Beaches and WWII memorials. Unlike Caen, Bayeux was spared damage during the Allied invasion and today retains medieval charm and a beautiful Romanesque cathedral.

The most famous sight in town is the Bayeux Tapestry, an 11th century work of art that tells the story of William the Conqueror’s invasion of England.

Normandy’s coastline borders the English Channel and is famous for a successive chain of seaside towns. From glamorous beach resorts to scenic coastal towns and bustling industrial harbors, the northernmost section of Normandy is characterized by great beaches, seafood and views. 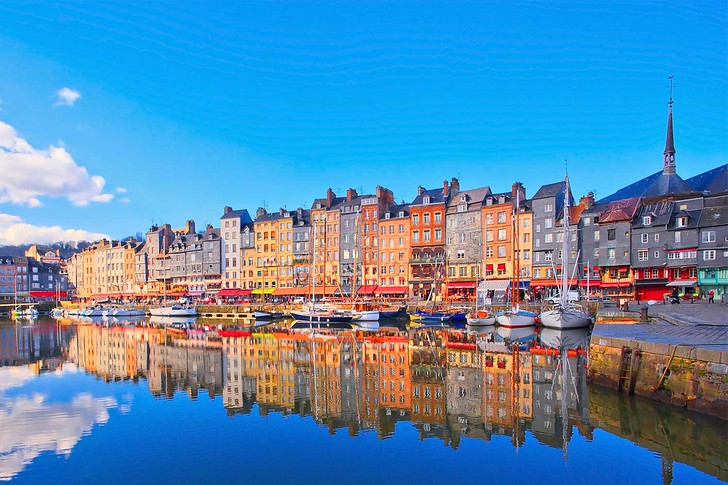 Honfleur is a pretty port town on the Seine. Originally one of France’s primary ports for trading with North America, it was overtaken by Le Havre when too much mud flooded its harbor and prevented large ships from docking.

That misfortune has turned out to be a blessing in disguise. Today, Honfleur is one of France’s prettiest medieval port towns, with colorful mansions, restaurants, galleries and yachts all jostle for a piece of the harbor.

At first glance, Le Havre might not meet your traditional standard of beauty. Practically razed to the ground during World War II, post-war Le Havre was rebuilt cheaply in concrete.

That’s not to say it’s ugly.

Rather, the town’s architects embraced concrete to create a modern concrete jungle of geometric columns. Less Soviet blocks and more concrete chic, Le Havre was meticulously designed to a grid system, with uniformity, spaciousness and light filled interiors. In fact, Le Havre was recognized by UNESCO for its unique architectural style! 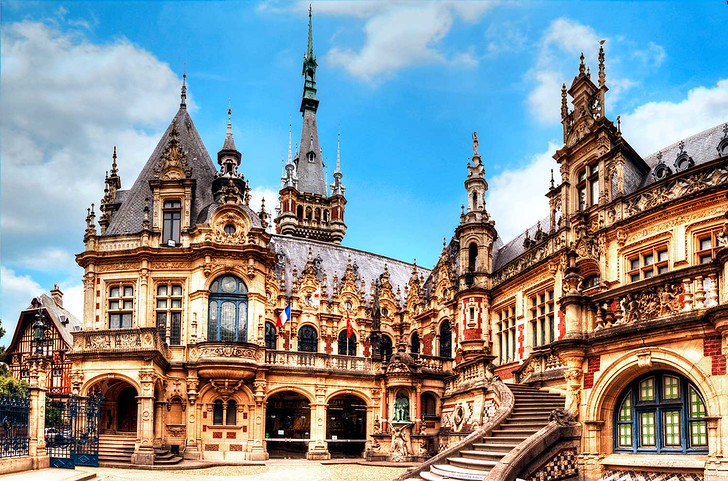 You might have heard of Fécamp from a Guy de Maupassant novel, as the French writer lived in this seaside village for many years.

Fécamp is a pretty resort town on the coast of Normandy, surrounded by tall white cliffs. The town is most famous for its Benedictine abbey. In the Dark Ages, Abbatiale de la Ste-Trinité, was established here and claimed to have acquired drops of Jesus’ blood, by way of a floating tree that had washed up on the beach. As a result, the town quickly became the most important pilgrimage site in Normandy.

The charming fishing village of Yport is like a step back into the past. Yport has a unique location on the coast between the forest and the sea.

The traditional town is blissfully empty of tourists, with quaint fisherman cottages and winding cobblestone streets. Yport and makes for a great escape off the beaten path! 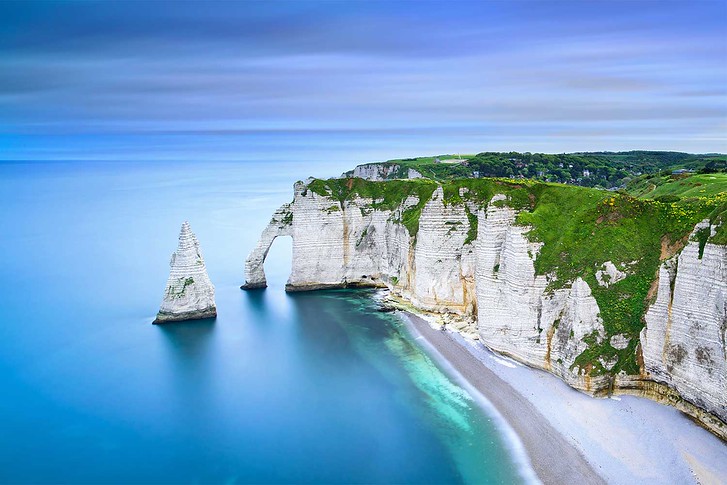 The small village of Etretat sits on France’s northern coast, and is most famous for its chalk-white cliffs. Natural arch formations and fresh sea breezes have made Etretat the favorite of both Impressionist painters and modern-day visitors. Head out to the little chapel on the northern cliff and spot the natural arch which looks like an elephant diping his trunk into the sea. 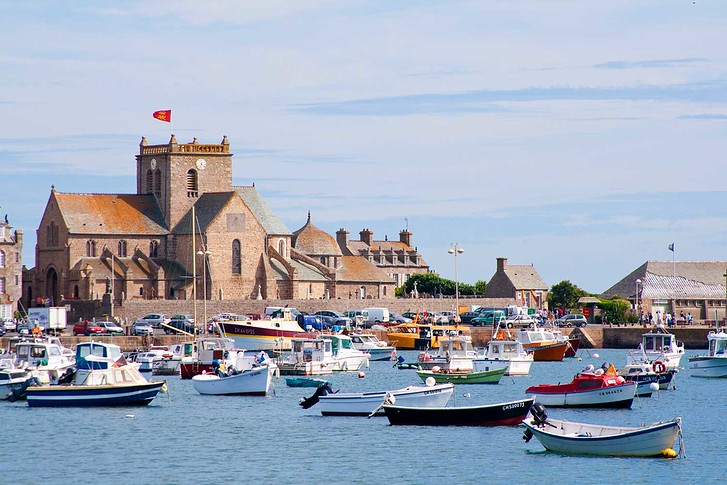 Barfleur is one of the prettiest towns in Normandy and resembles a classic Norman fishing village, with small boats, a quaint harbor and stone houses. The town is known for its great seafood, coastal paths and scenic beaches. 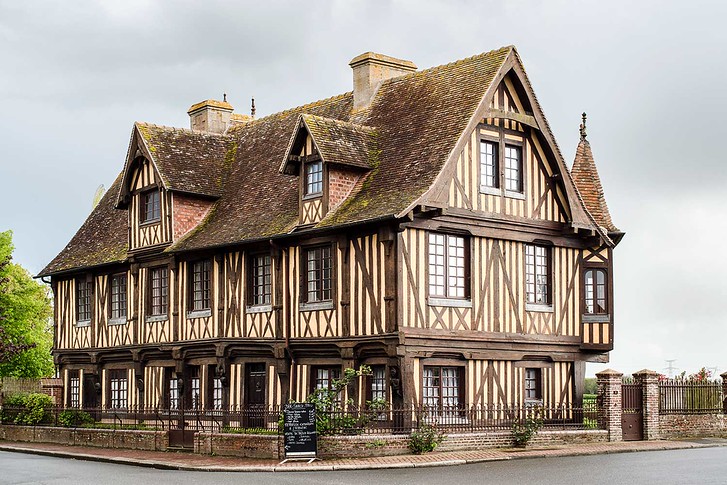 Away from the sea lies the agriculturally rich section of Normandy, characterized by rolling green fields, apple orchards and thick forests.

This is rural France at its finest, where you’ll find delicious Norman food products like Camembert cheese, Calvados apple brandy and local cider. With plentiful dairy cows, Norman cuisine is rich in butter, cream and cheese and you could spend days eating to your heart’s content. 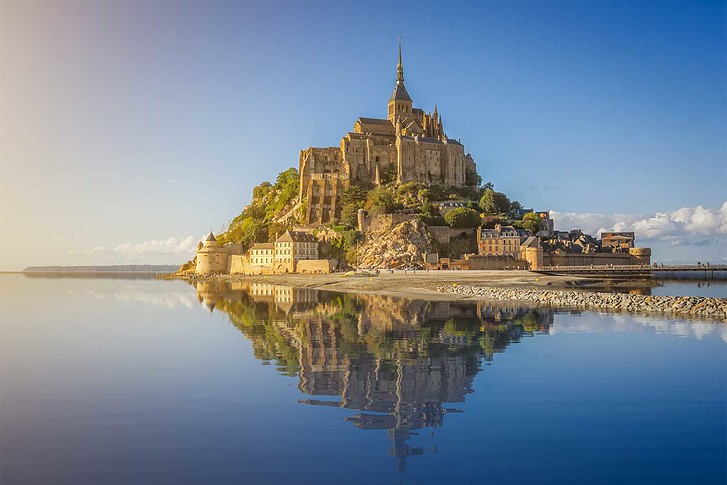 On a tiny island between Brittany and Normandy, the abbey of Mont St Michel is breathtaking. At high tide, the sea completely encircles the island, submerging the foot path under dangerous currents (there is a futuristic bridge to take instead).

Built in the Gothic style, Mont St Michel is one of Normandy’s most famous sights and prettiest places to visit.

While exploring the countryside outside Paris, Claude Monet stumbled upon the peaceful town of Giverny and immediately designed to relocate. Here, he built a house and custom garden and spent the last 43 years of his life painting prolifically.

Visit Giverny from spring to fall to see the garden in full bloom. There’s nothing quite like it!

Read more:  What to Know Before Visiting Giverny

How to Get to Normandy by Train From Paris

Normandy is pretty close to Paris.

You can easily see towns like Giverny, Vernon and Auvers-sur-Oise from Paris on a short day trip. The train takes under an hour and runs several times a day.

If you want to visit the D Day beaches, it’s a bit farther. It’s certainly possible to see the landing beaches on a day trip from Paris but it will be a long and exhausting day.

We recommend taking the train from Paris or a scenic river cruise on the Seine, and stopping overnight in either Rouen, Bayeux or Caen. More information on getting from Paris to Normandy can be found in this post.

The best way to get around is by car, so that you have the freedom to drive along the coast and stop where you wish!

Read more:  How to Get from Paris to Normandy

Where to Stay in Normandy

Since Normandy’s best sights are spread out, it makes the most sense to base yourself in Normandy for a couple of days to properly explore. Find deals on Normandy hotels here.