Most people simply pass through Vernon.

This tiny French town on the banks of the river Seine is often reduced to a stopover as day trippers from Paris take the train into Vernon and move straight on to Giverny, eager to see Monet’s House and Gardens.

But if you have time, Vernon is a pretty town that’s worth a look around. With streets full of half timbered homes, historic chateaux and a countryside immortalized by Claude Monet, Vernon is a charming stop with a number of historical sights.

Getting In to Vernon

Most people take the train from Paris to Vernon, because they’re on their way to Giverny. The fastest trains take just under an hour and depart from Paris’ Gare St Lazare station.

Where to Stay in Vernon

Vernon is a compact small town and very walkable. You can either stay overnight in Vernon, or the next town over, Giverny – which is famous for Monet’s House and Garden.

Here are some of the best hotels in Vernon:

Hotel Normandy – A family-run hotel in the center of Vernon, Hotel Normandy has a nice atmosphere and simple but large rooms. With affordable rates and a solid restaurant, it’s a practical place to base yourself for the night. Every sight in town is within walking distance.

La Pluie des Roses – If you’re interested in exploring Vernon but primarily want to see Monet’s Garden in the town next door, consider staying overnight in Giverny. La Pluie des Roses is a classic Norman bed & breakfast that offers cozy rooms and beautifully decorated interiors. The owners are a great source of insider tips for what to do in the area!

Read more:  Where to Stay in Giverny 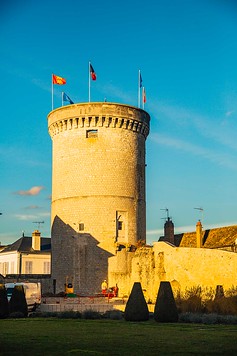 Things to Do in Vernon

Vernon was founded in the 10th century by Rollo, the first Duke of Normandy, and spending an afternoon here is like walking back in time.

Many streets retain the narrow little half-timbered houses that were common in the Medieval ages. With a famous old mill, elegant 18th century townhouse and plenty of quaint cafes and restaurants, Vernon is great to explore over a leisurely lunch and much quieter than tourist-filled Giverny.

Read more:  20 Things You Must Do in Normandy, France

Vernon was built right on the River Seine. Most river cruises dock right in the center of town, so you can disembark, head straight and reach the square of Hotel de Ville in just a couple minutes.

No need to really go inside – the Town Hall is just an administrative building. But what’s interesting is that the Town Hall bell tower was constructed slightly higher than the town church (right opposite). At the time of its construction, Vernon’s religious and civil powers were locked in a fierce power struggle and the mayor wanted to make a statement!

Read more:  Everything You Need to Know about a Paris River Cruise

2. Take a Photo of the Old Mill

If you’re visiting Vernon on a river cruise, look in the opposite direction (towards the opposite riverbank) and you’ll spot the town’s #1 landmark: Le Vieux Moulin.

The old mill straddles two pieres of an ancient bridge on the Seine river. While there used to be a wheel to power the factory, it’s long since gone so only the little house remains.

The brick and timber structure was originally built in the 16th century and was painted by many French painters, including Claude Monet. In World War II, the mill was badly damaged and today you can only take pictures from the outside. 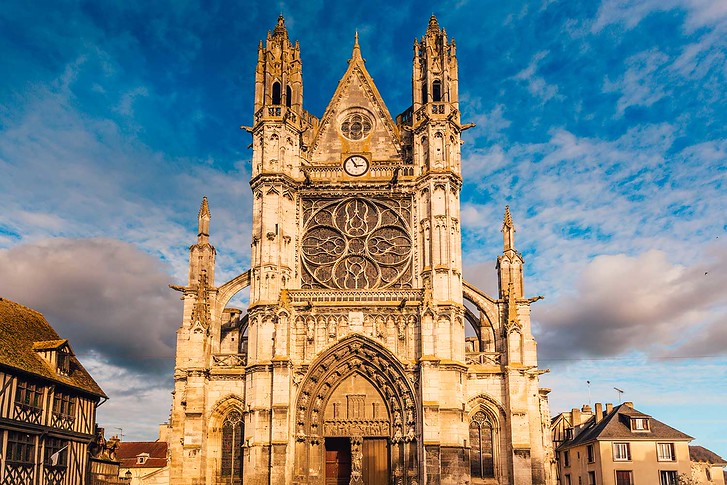 Facing the Town Hall is the city’s magnificent church.

Collegiale Notre Dame was started in the 11th century and took centuries to finish. With its flamboyant Gothic architecture, the elegant church is a dramatic town marker.

We visited Vernon via river cruise and our ship docked right behind the church, on the Seine River. When rainfall is heavy, the Seine has a tendency to flood and in 1658, overflow threatened to reach the church so the pavement was raised. Two engravings on the church’s outer wall commemorate the flooding.

If you pop in for a look, spot the unique rose glass window on the west side of the building. Most of the stained glass windows were broken in World War II, and have been replaced with more contemporary style designs.

The dramatic pipe organ is original though – dating back to 1610!

4. See The House of Past Times

On the square corner, you’ll find Vernon’s Tourist Office – in perhaps the city’s most stately address.

Le Temps Jadis, or the House of Past Times, is the oldest building in Vernon. The building dates back to the 15th century and is the only remaining house from the era – all the others were heavily destroyed by bombing during World War II.

When Le Temps Jadis was first built, it’s owners selected a bustling location, on the main highway connecting Paris to Rouen and greater Normandy. It was originally an inn, with a prime address on the corner of Rue Saint-Sauveur and Rue Carnot next to the local church.

By 1954, Clemenceau Bridge was built and the road become less trafficked. Luckily, the 15th century house remains and is now officially a French historical monument. Inside, you can pick up a map of Vernon and a guide to its old medieval streets.

Don’t forget to examine the exterior! Note the corbelled exterior, top attic and corner post, which is delicately carved with a wooden statue of the Annunciation (when Angel Gabriel announced the coming of Christ to the Virgin Mary). 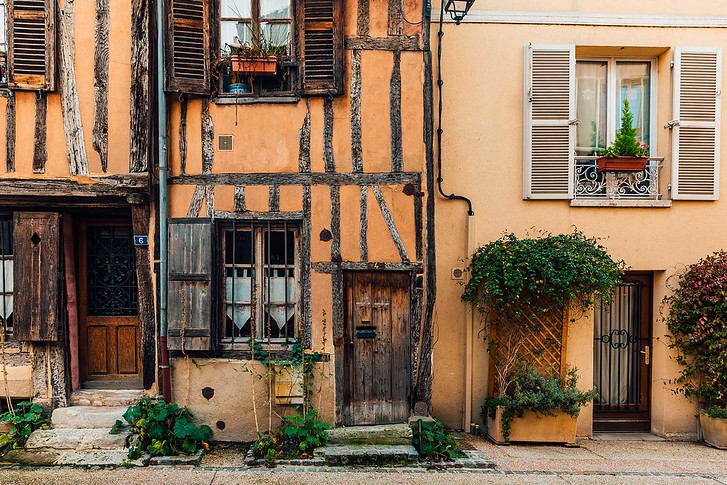 Although heavily bombed in World War II, Vernon miraculously has retained its medieval character. Walk through the town to discover charming streets that still have half-timbered houses, carved beams and wrought iron signs.

There are over 233 wooden houses scattered throughout town. You’ll find them concentrated among these streets:

Want to see art from local Giverny and Vernon artists?

Head to Musée Alphonse-Georges Poulain where you’ll find a gallery of impressionist paintings (including 2 by Claude Monet!) and additional works by the American artist colony at Giverny. Only copies of Monet’s work exist in Giverny, but the originals are houses in Museum Pulain.

The 17th century mansion also houses animal art and is worth a look.

7. See the Archives Tower and Battlements 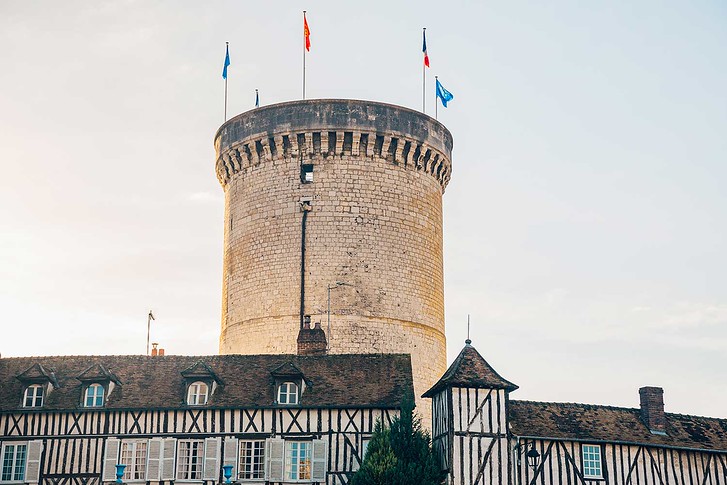 Vernon once had an ancient castle, built by Philippe-Auguste at the end of the 12th century.

Today, all that remains is a tower. Currently used to keep the city archives, the tower is 22 meters high and takes 102 steps to reach the top. The Archives Tower is typically closed, but if you visit on Heritage Days (in late September), you’ll be allowed to climb up!

Take a walk to see the ancient round tower and then head over to Rue Potard, the oldest street in Vernon full of half timbered homes.

Chateau de Bizy is about a mile outside Vernon and is often called Normandy Versailles due to its beautiful gardens and water fountains.

Bizy Castle was originally built in 1675, but redesigned by the Count d’Ivry in 1740 after a classical style inspired by Versailles. The property changed owners several times through various French nobility until falling into the hands of the Duke of Albufera family – who are descended from a brother of Napoleon Bonaparte. Inside, you’ll find beautiful tapestries, woodwork and furniture along with memorabilia related to the Bonaparte family.

On a guided tour, you can explore the castle and grounds where you’ll visit the Grand Salon, dining and drawing rooms. The tour continues to the orangerie, stables and carriage collection.

Don’t forget to check out the water gardens!