By day five of our Viking River Cruise, we had reached the middle region of the Rhine River! Most days we disembarked into town early for a tour and sightseeing but today we were able to sleep in, grab a late breakfast and head to the roof deck for some spectacular views.

The Middle Rhine is known for its many scattered German castles. I think most would be better called castle fortresses to Americans since they’re not quite the Disney-esque German palaces that I had envisioned. Don’t get me wrong! They’re still beautiful and I especially liked the juxtaposition of the stone walled castles above and the colorful little villages below.

On our Viking cruise in mid May, it was still a tad bit chilly and unfortunately on that particular day it chose to rain. Luckily, Viking river ships are beautifully built Nordic masterpieces of light and we were able to dart down to the Aquavit terrace and still benefit from spectacular open views while shielded from the downpour. History of the Rhine River’s Castles

Despite notions of Romantic Rhineland, life in the Middle Ages was “nasty, brutish and short’ as Thomas Hobbes once remarked. It’s little wonder then that these German castles on the Rhine were thick-walled fortifications, tricked out with tight winding staircases, slit windows and uneven cobblestone floors. Perhaps it’s just Americans raised on Disney fairy tales who have their history warped.

In the Roman Ages, the Rhine River was the rightmost border of the empire and the Romans constructed a long paved valley road along the left bank of the river. During the Medieval Ages, the Rhine River continued to form a vital route for transportation and most of the castles were built throughout the 12th and 14th centuries to serve as customs control over trade.

By the middle of the 14th century, firearms and cannons rendered many castles useless and most were abandoned or began a descent of slow decline. Passing troops during the Thirty Years War destroyed many of the fortresses while King Louis’ armies finished the rest off during the War of Palatine Succession. 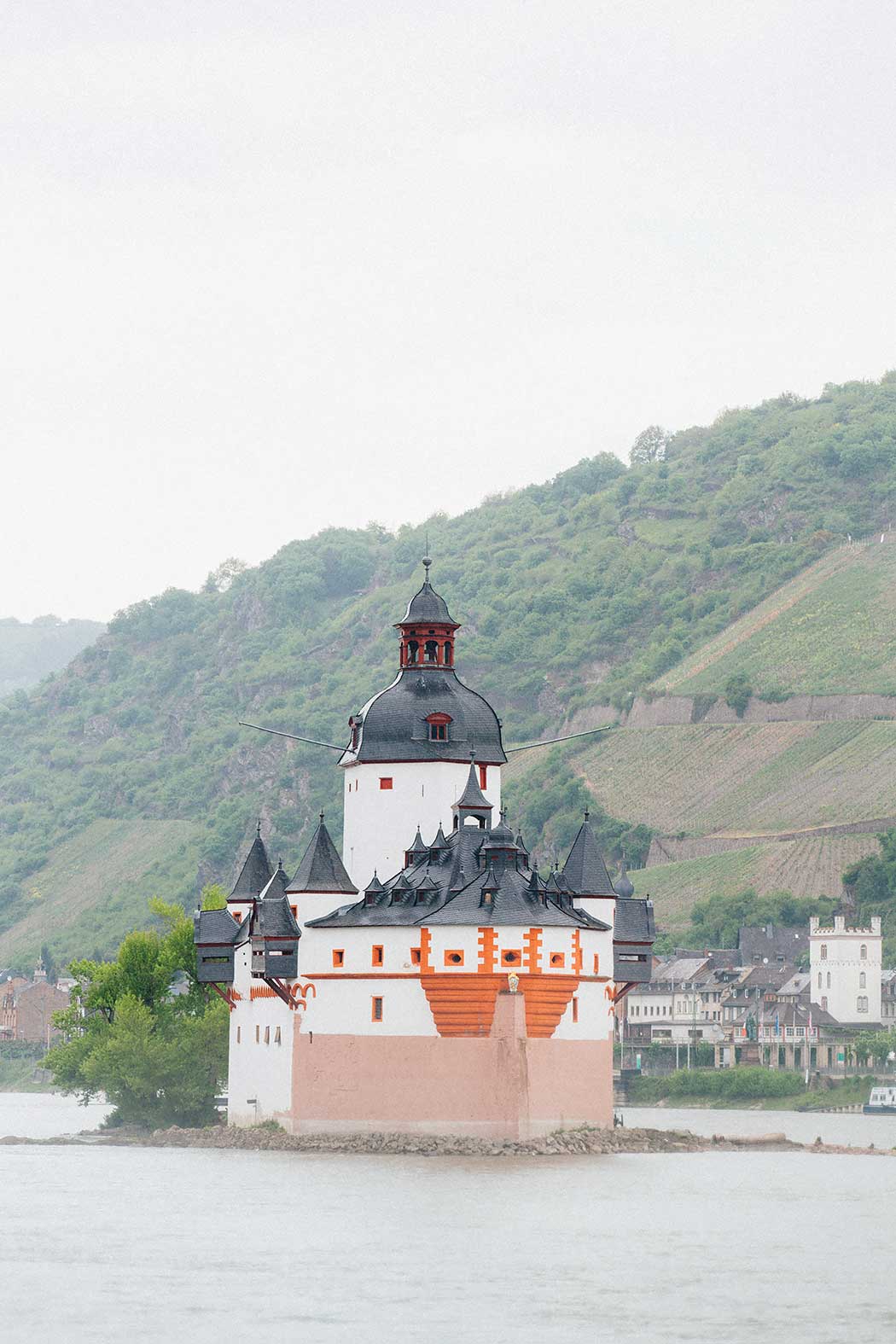 Only three castles remain relatively intact in the upper valley and most travelers visit one of these, making them the most famous castles in Germany along the Rhine River.

Marksburg Castle is the last original castle on the Rhineland and the interiors are viewable via guided German tour. For an English tour, Viking hooked us up! More details and photos on our visit below.

Burg Eltz Castle is located on the Mosel River and quite popular. Many people love this one for its interior!

Cruising Through the Rhine River Valley

We sailed Viking’s Rhine Getaway river cruise and had a wonderful, relaxing morning spotting each of the castles along the left and right banks. The Middle Rhine is quite a unique section of the river, formed low by erosian while simultaneously lifted to create high cliffs.

It was quite unique to see the constant sprinkling of village settlements in the low valley dominated by castle topped cliffs from overhead. Meanwhile, the hills in between are quite perfect for growing grapes and so we noticed lots and lots of vineyards.

From the middle of the river it was nice to get a lifted view but if you want to see the miniature castle details – the flags, windows and turrets – I’d recommend bringing binoculars. I had my massive camera zoom lens and was able to see them through that! The most unique thing we learned is that many of the German castles on the Rhine River have been transformed into hotels. Most are high end luxury accommodation but there’s supposedly even a hostel!

The most popular German castle hotel on the Rhine is Castle Hotel Auf Schoenburg. The property has extensive gardens and described as straight out of a fairytale. Everyone who stayed seemed to rave about the gourmet meals as well! Marksburg Castle holds the unique distinction of being the only castle in the Rhineland, between Bingen am Rhein and Koblenz, which was never destroyed. We took a guided tour of the fortress interior during our Viking River Cruise. The entire visit to Marksburg took just under an hour and explored the ramparts, outer walls and interior bedroom, kitchen, etc.

The fortress is a protective, military-style castle and not a comfort residence so right inside the large double doors we found a cobblestone ramp. The protective accouterments only increased as we explored more. From stairs designed to go up and down to confuse potential enemies to tight corridors and arrow slits, Marksburg is a unique stone keep representative of the Middle Ages.

There’s a great view of the two rivers below and overall, we enjoyed the history and detailed tour! Marksburg Castle is located closest to the city of Koblenz and makes for a great morning or afternoon daytrip.