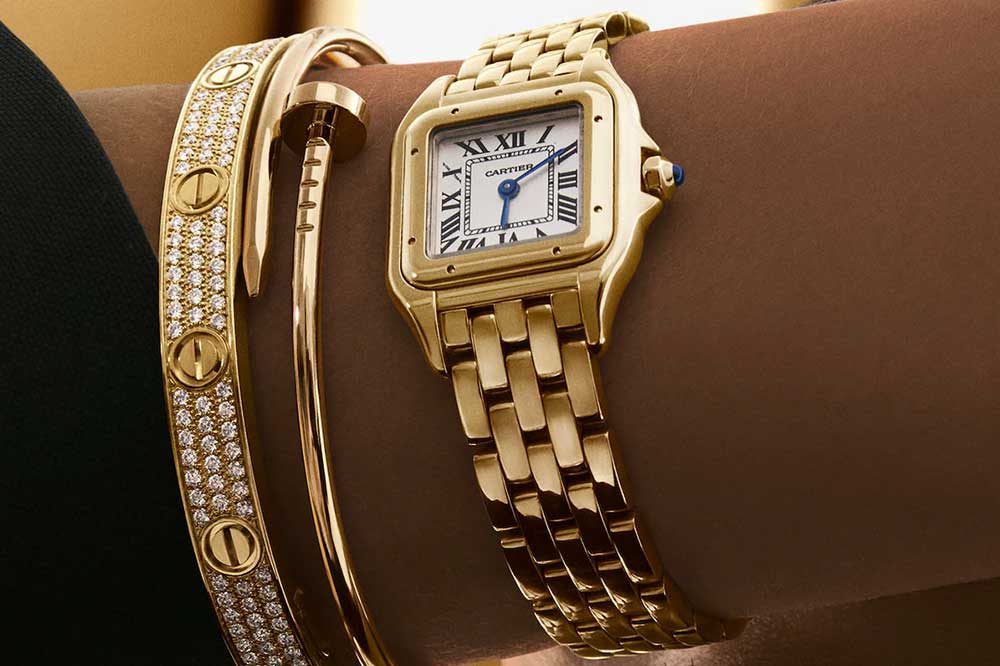 Cartier’s timepieces have been famous throughout the years.

No one watch style has been more iconic than the Panthere: a sleek, slinky bracelet style worn by men and women alike.

Here’s everything you need to know about the Cartier Panthere watch – including if you should buy one! 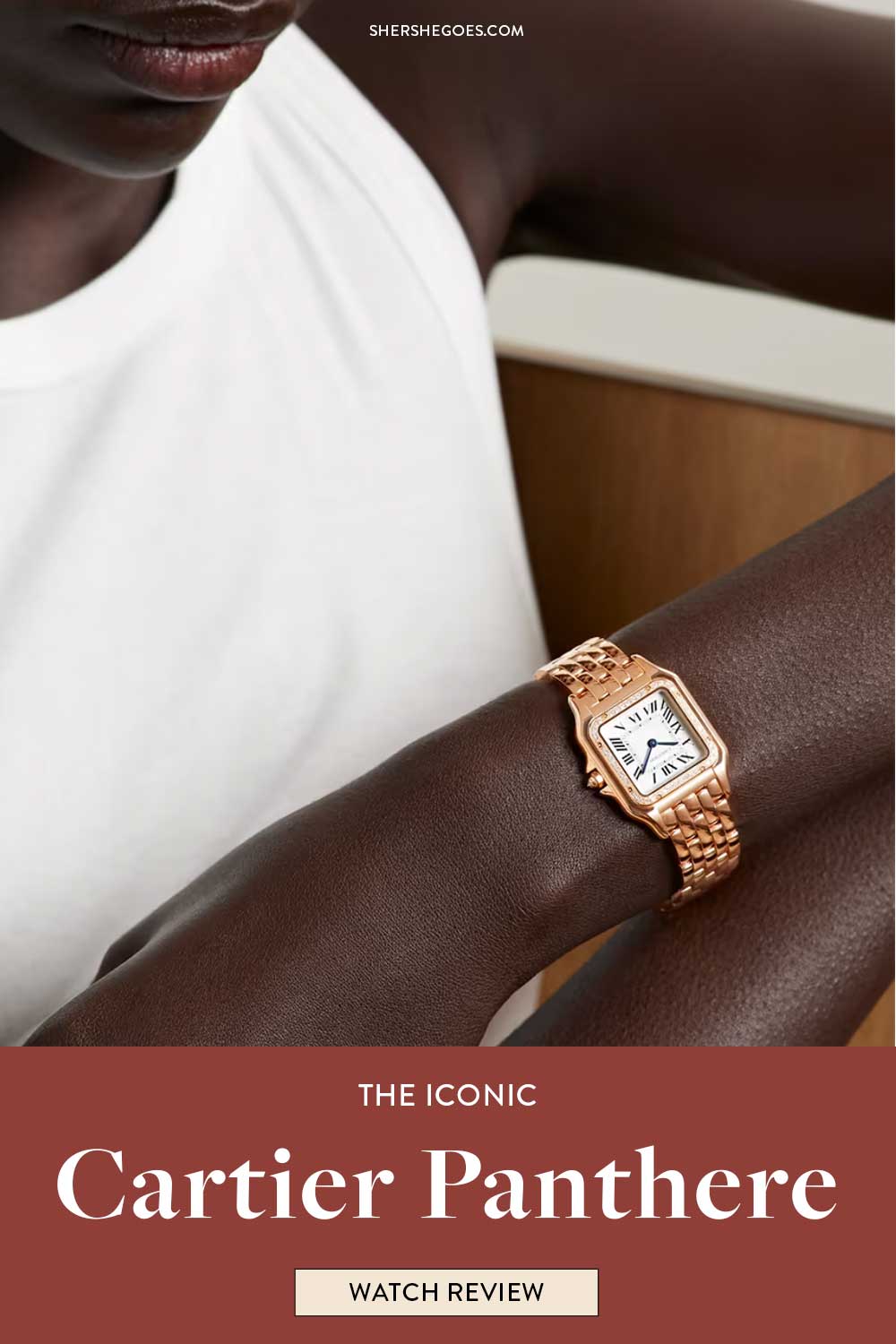 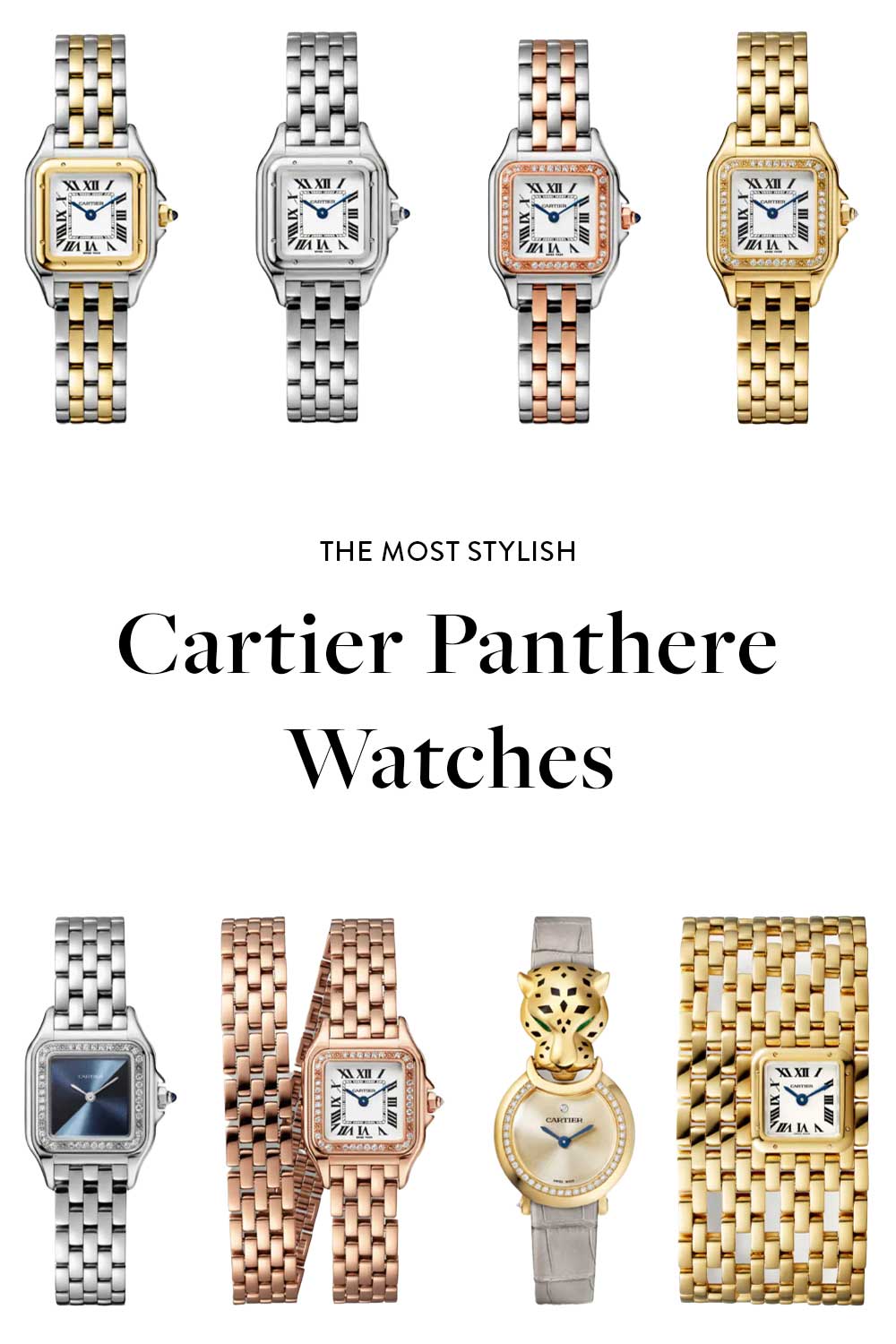 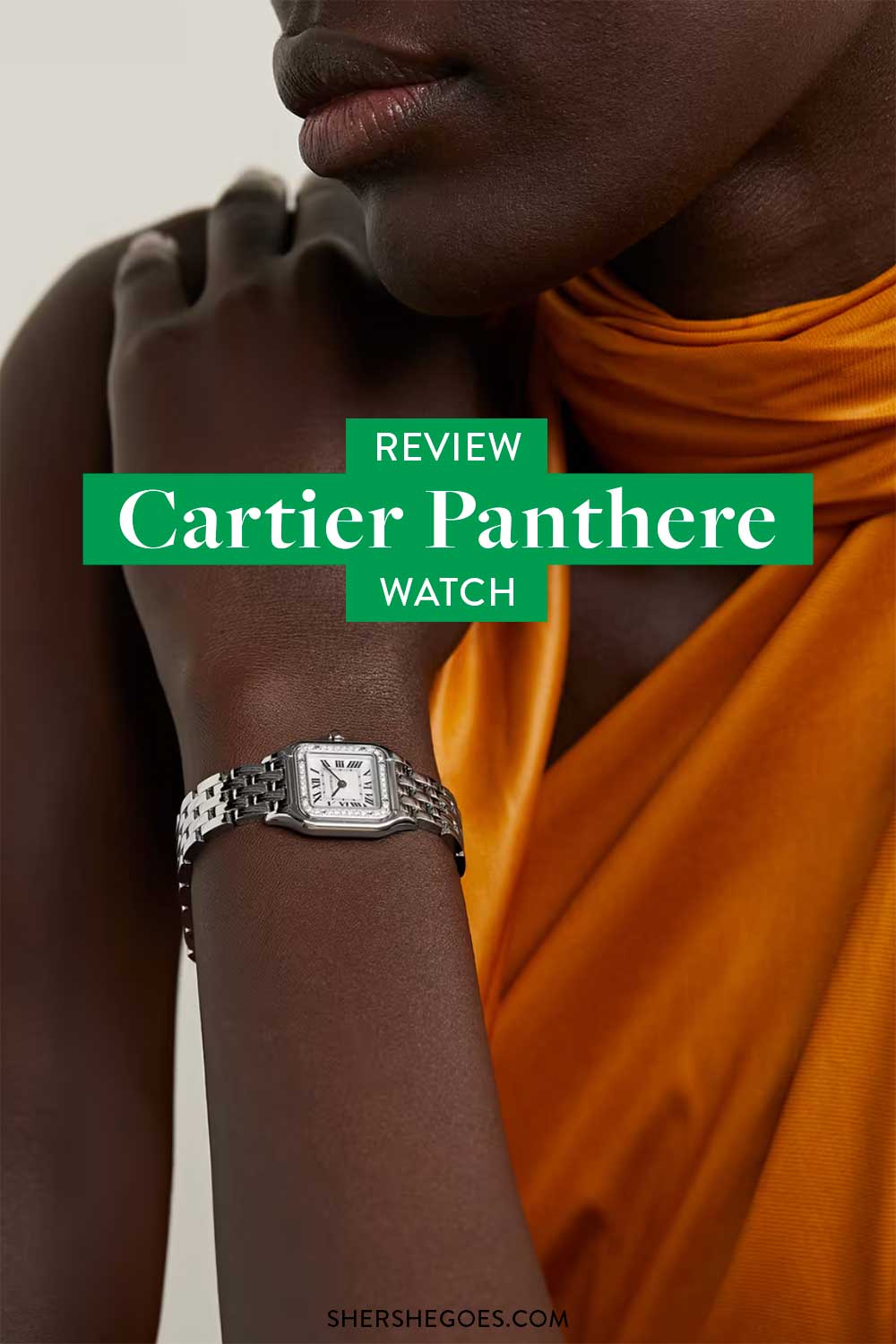 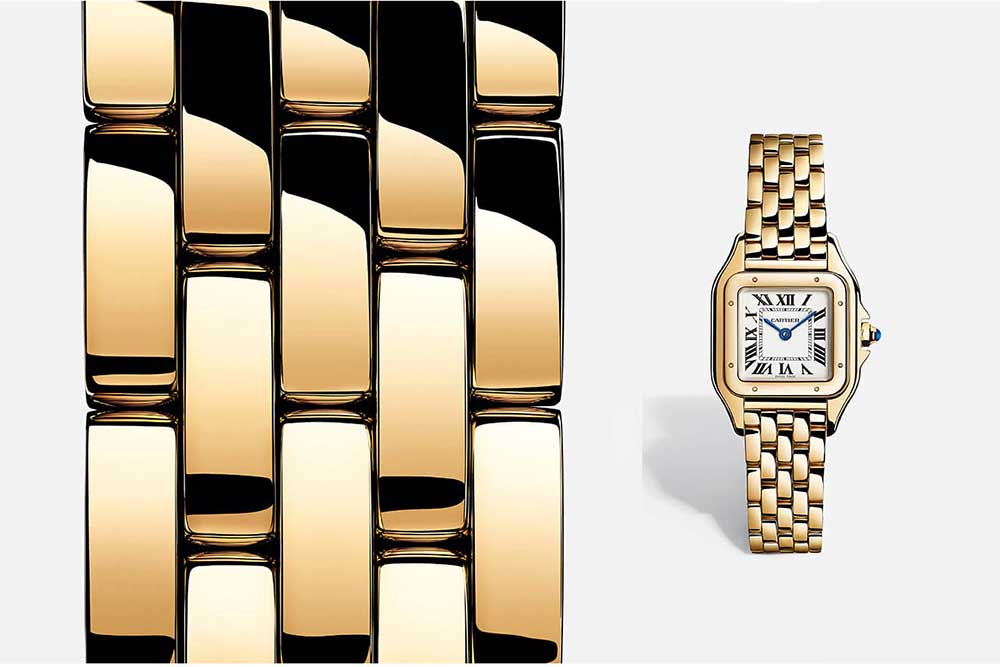 The Panthère de Cartier watch was first created in 1983 and was an instant success.

At the time, 80s fashion didn’t have many cult pieces so the Panthere watch was among the first.

It was glitzy, designed to catch the eye with its square case, signature Cartier Roman numeral dial and blue sword shaped hands. It also had the blue sapphire crown found on most iconic Cartier watches.

But the most distinctive element was the bracelet. 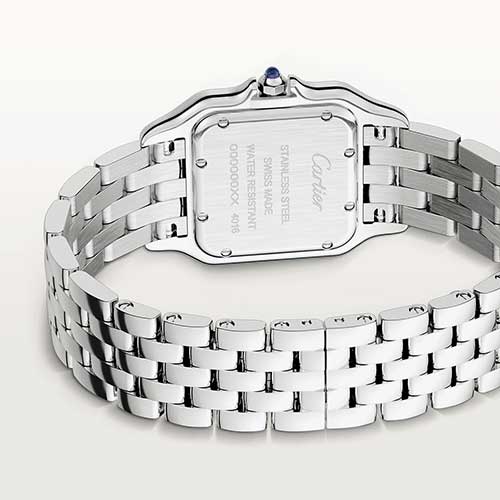 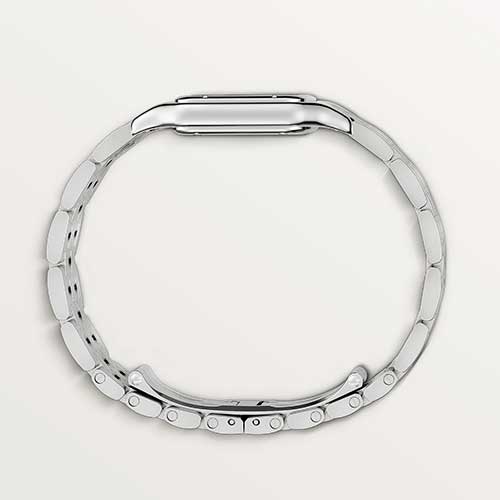 Unlike most watches of the time, the Cartier Panthere watch had a supple brick-like bracelet formed out of links. It was presented as a watch that also doubled as jewelry.

The ultra flexible bracelet was meant to mirror the undulating movements of a sleek, sexy panther.

Comfortable to wear, luxurious and slinky, the Panthere bracelet was famously created with a folding deployant buckle that concealed the clasp.

When worn, you can’t tell where the watch opens and closes.

I filmed a review video of my Cartier Panthere watch. See it below, or watch on Youtube here:

CARTIER PANTHERE WATCH: Should You Buy It? (review)

While the panther has always been the signature animal of Cartier, the watch itself is named after a woman.

Jeanne Toussaint, the right hand woman of Louis-François Cartier, was his one time secret mistress whom he affectionately called his ‘La Panthère’.

She was the first woman to be appointed design director at the luxury jewelry brand and reigned from 1933 to 1970.

During her long tenure at the French jewelry house, she created many of the bold panther jewelry pieces that are now part of the iconic Panthère de Cartier collection.

Jewelry aficionado Wallis Simpson wore many of them! 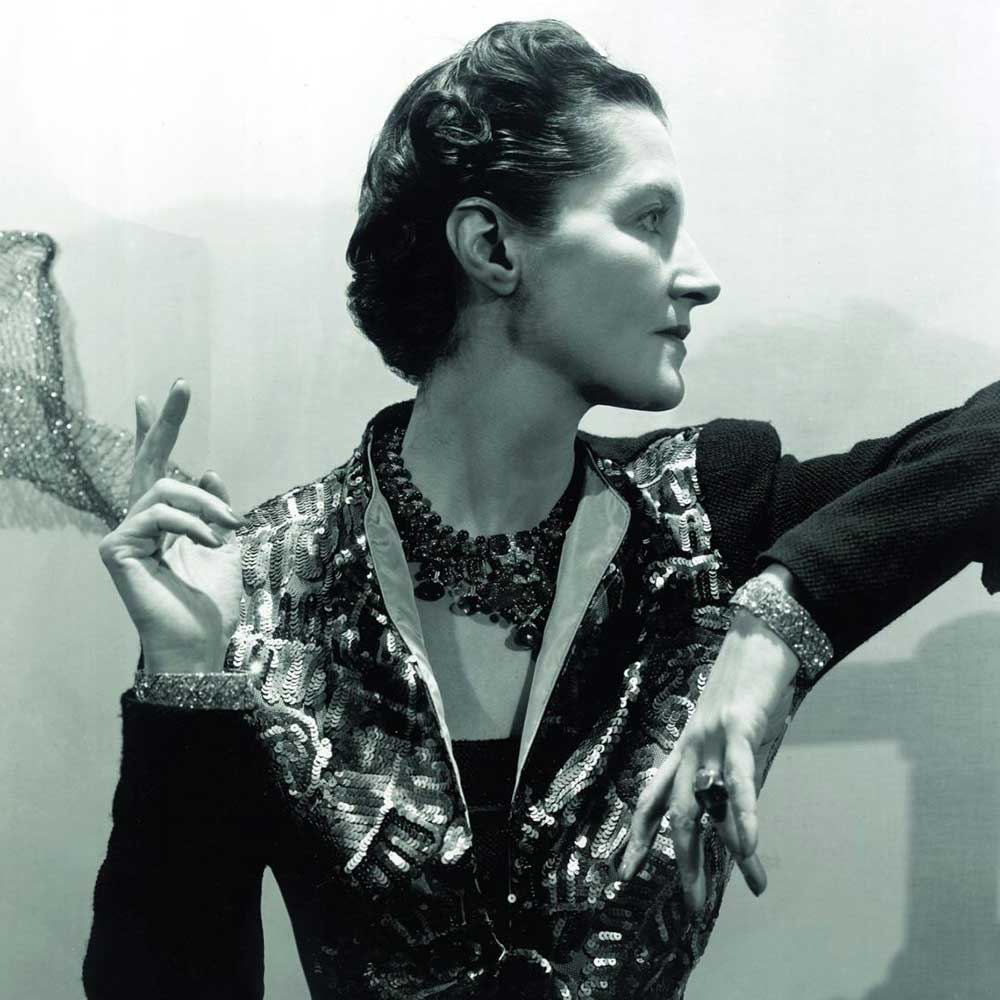 Toussaint was famously independent, living up to her Panthère moniker.

She sported a signature 1920s short hair cut, like a China doll or flapper girl, and dressed elegantly but uniquely.

Toussaint led an unconventional bachelorette lifestyle, often with a sense of nonchalance for propriety.

In one instance, she famously showed up to a dinner party with wet hair and in pajamas! 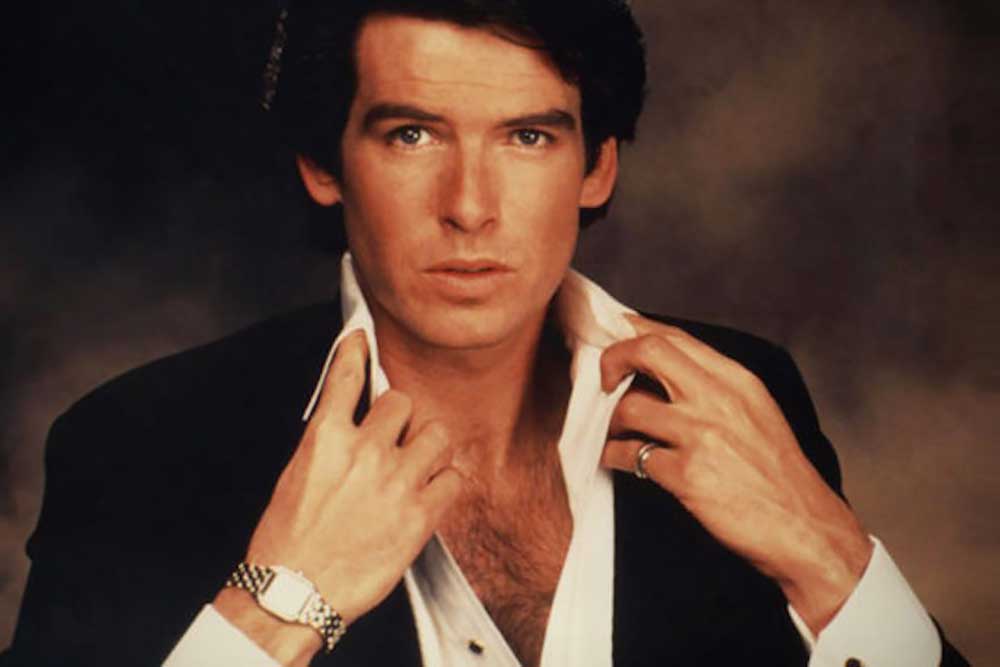 Celebrities with the Cartier Panthere

Today, the Cartier Panthère is known as the ‘IT girl’ watch.

So you might be surprised to find out that when it first was released, the watch was popular with men!

The Panthère was marketed to both men and women but saw instant traction among A-list male celebrities like Pierce Brosnan and Mick Jagger of The Rolling Stones. 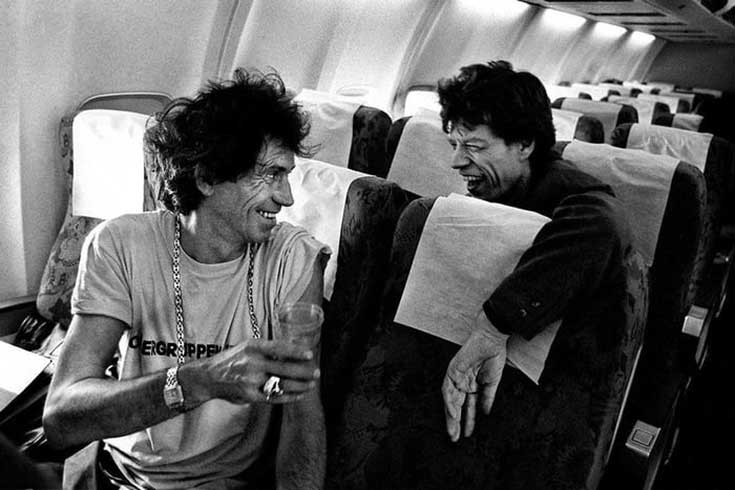 There are some iconic photographs of both men sporting the Panthere watch.

Brosnan wore it with a tailored suit and pinky ring while Jagger mixed it up more androgynously, with bold chains and a giant skull ring. But photographs alone don’t do the watch justice.

Perhaps no piece of pop culture symbolizes the glitz and glamour of the Panthere in the 80s than the 1987 cult classic movie, Wall Street. 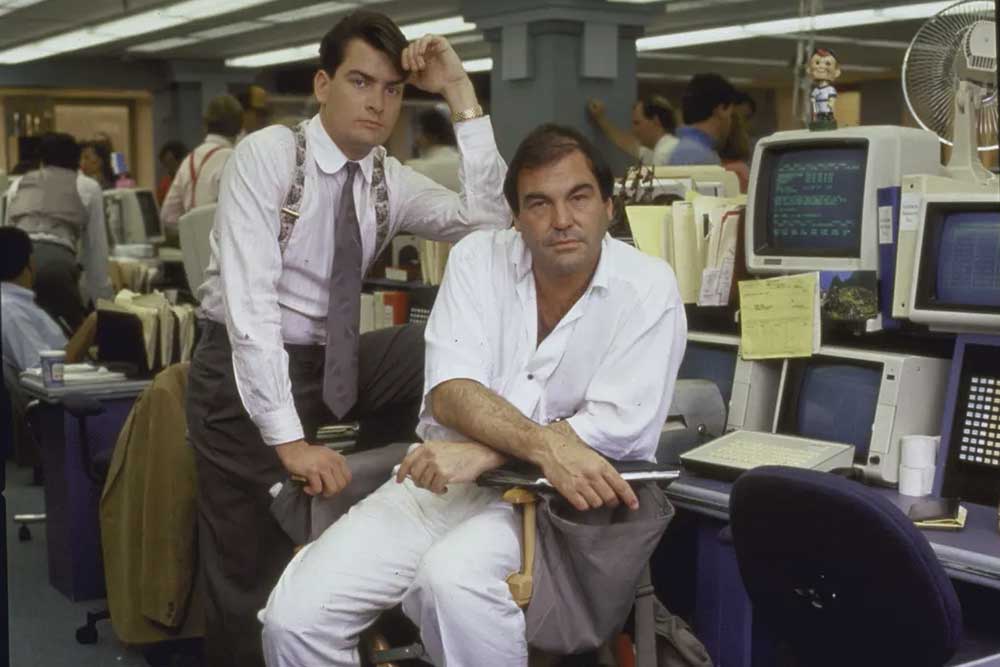 Cartier Panthere in the 80s

In it, Charlie Sheen’s character (ambitious trader Bud Fox) upgrades his accessory as a dedication to boss Gordon Gecko’s ‘Greed is Good’ mantra.

Fox upgrades his timepiece from a pedestrian quartz Lorus to a flashy yellow gold Cartier Panthère. His mentor in the movie, Gecko, also sports a Cartier (the big brother version, the Cartier Santos)

So when the Panthere watch was first introduced, it came in a wide range of sizes to suit all genders and tastes – including mini, small, medium and large. 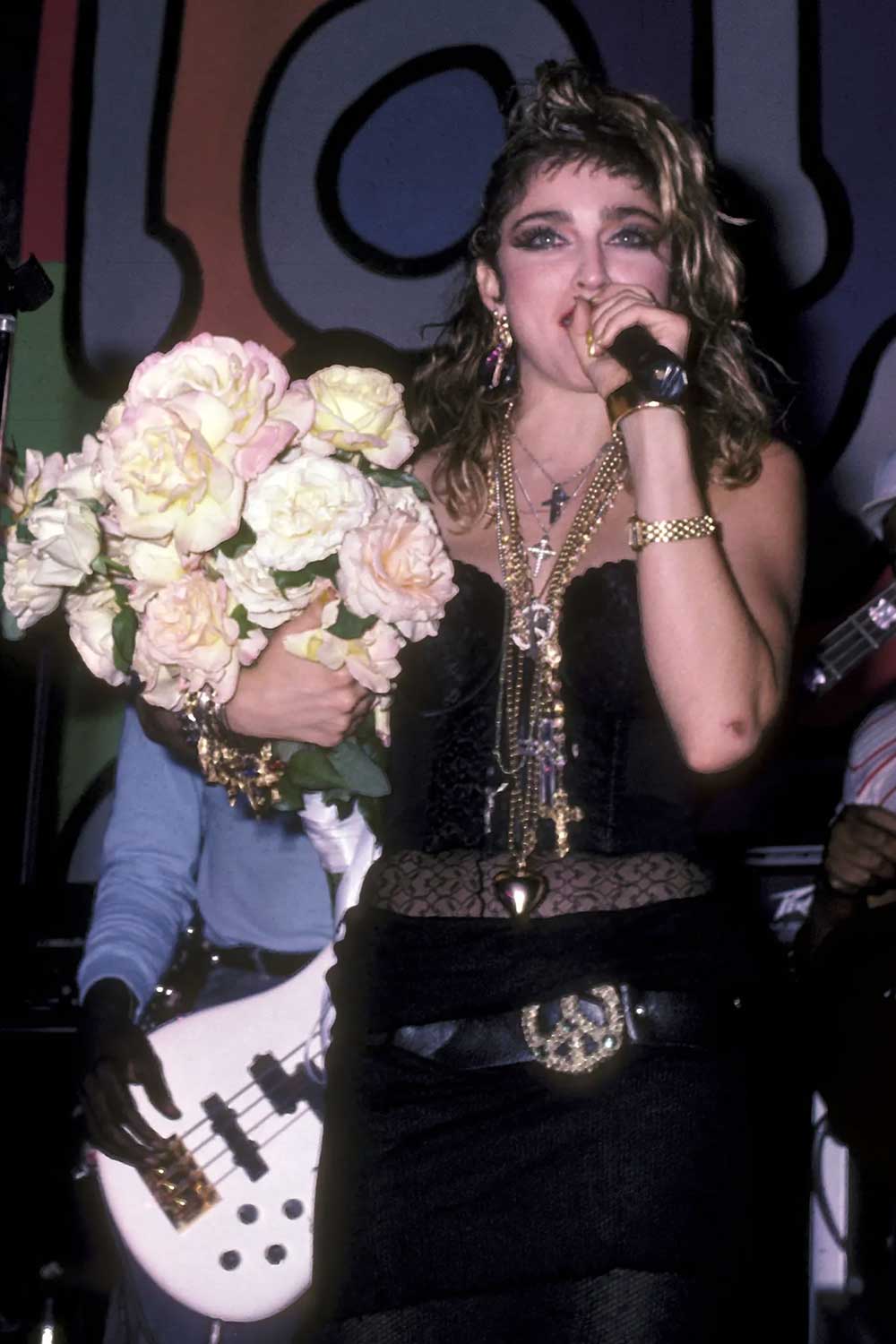 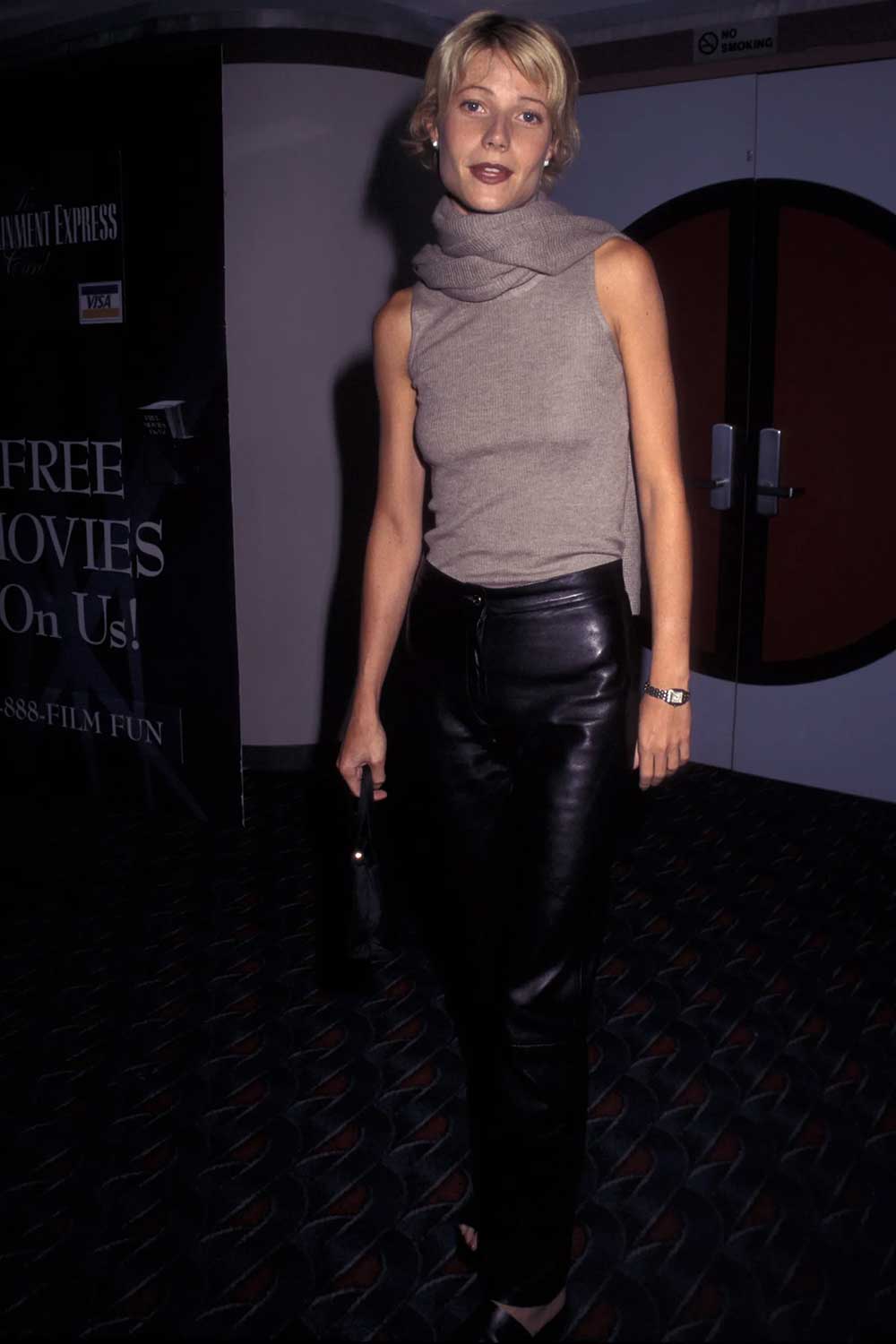 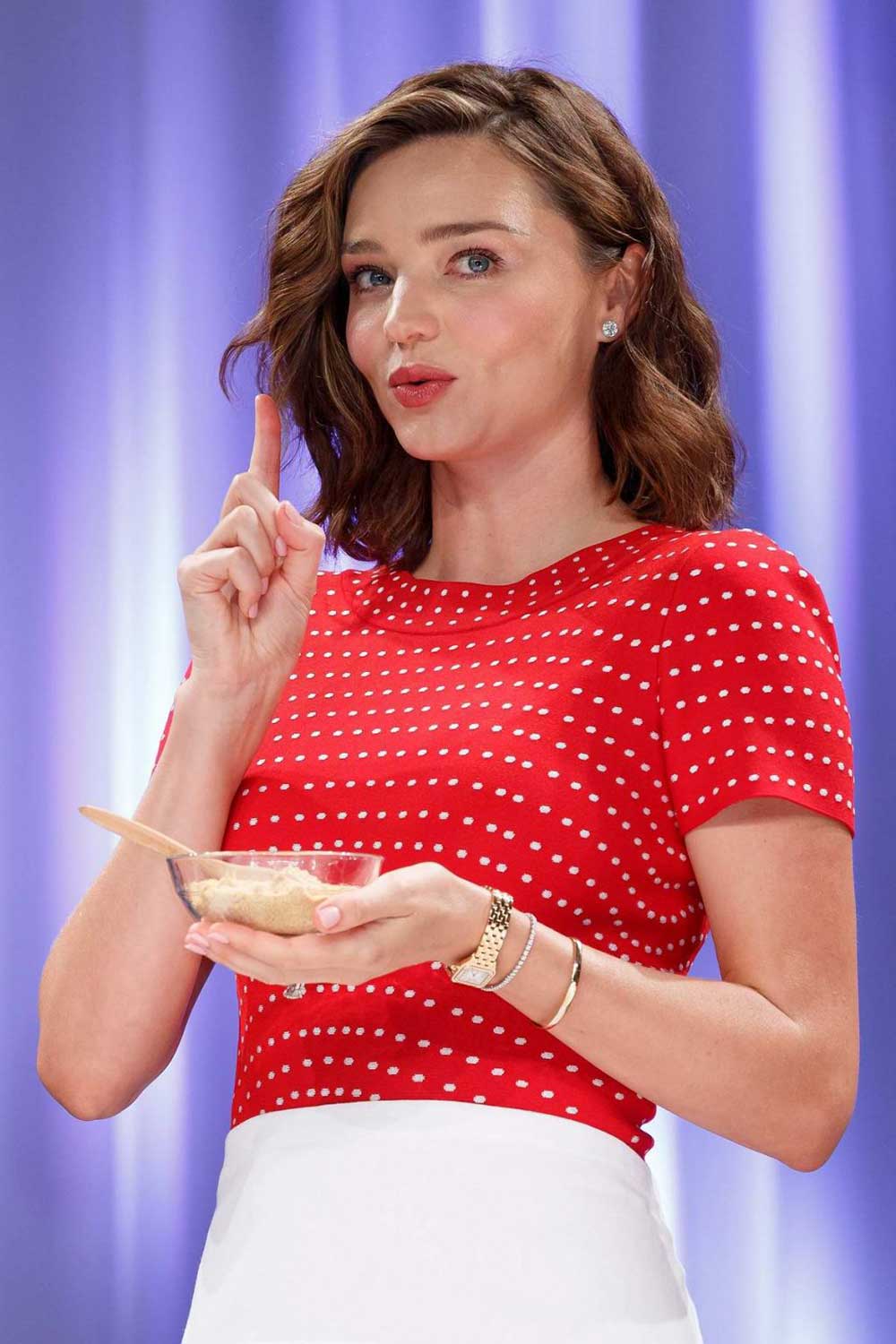 Cartier Panthere in the 90s

It wasn’t until the 90s that the Panthère de Cartier watch went mainstream.

It quickly became seen on the wrists of It girls everywhere, from Madonna to Gwyneth Paltrow. Paltrow’s famous 90s minimalist style was often accessorized simply and elegantly with the Panthere.

Madonna was said to love hers so much that she gifted a Panthere to Alanis Morissette upon the success of her chart topping album Jagged Little Pill.

Even Margaret Thatcher wore one! 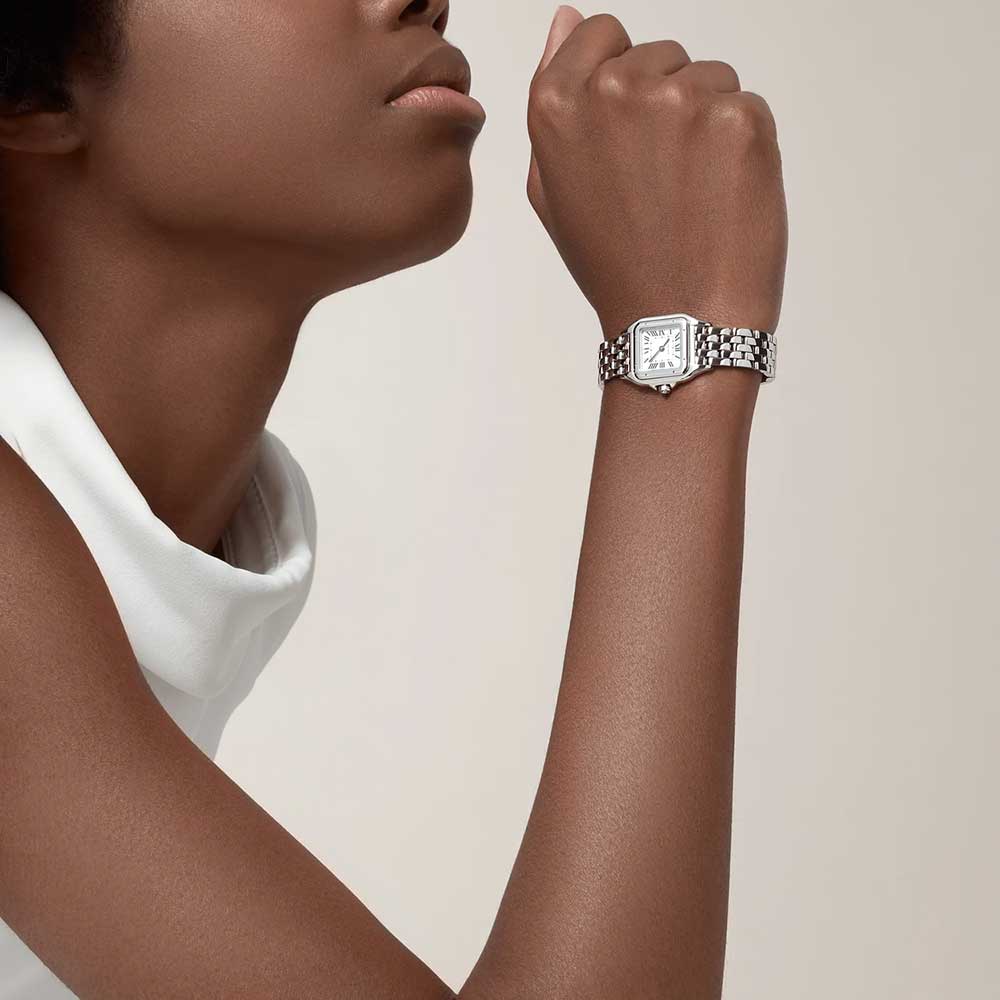 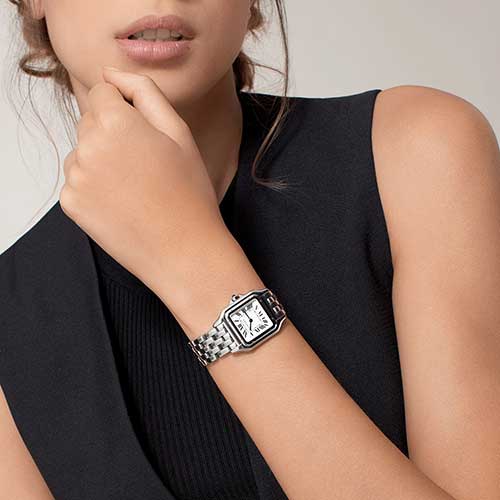 The Panthere Watch is Discontinued

The Panthère was eventually retired in 2004.

Cartier often removes classic pieces from its collection only to reintroduce them later. No one quite knows why, but it’s certainly an effective marketing strategy.

Vintage Cartier often retains its value on the pre-loved market and new reintroductions always generate lots of buzz and hype.

Not surprisingly, Cartier eventually brought the Panther watch back.

In 2017, Cartier reintroduced the collection, with some modernizations and new finishes. 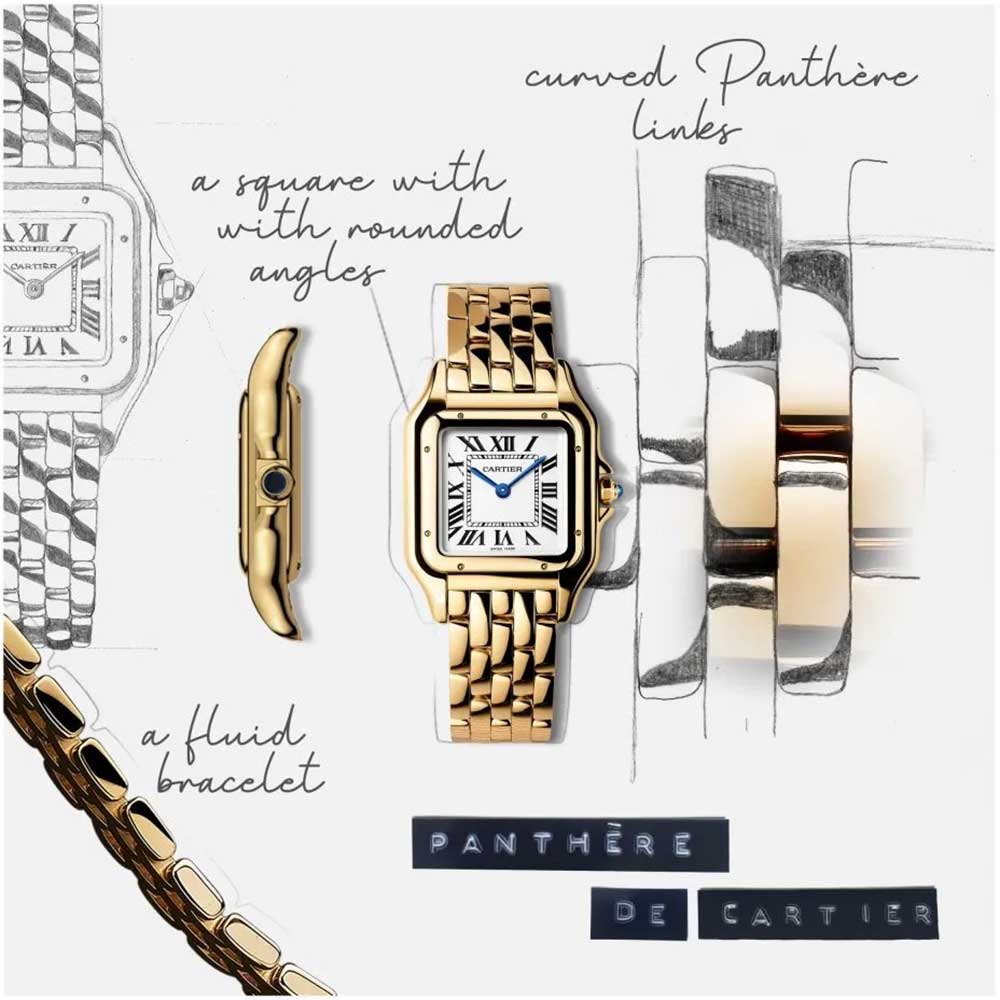 Subtle updates included a whiter dial, inserting the brand name in the X numeral and adding waterproofing up to 30 meters.

But the main change was to the bracelet’s articulation.

Cartier restructured the links, removing some of the gaps to create a tighter look in the bracelet and removed the date on the dial – all to further accentuate the ‘jewelry’ aspect of the watch.

Another big change was in the sizing. 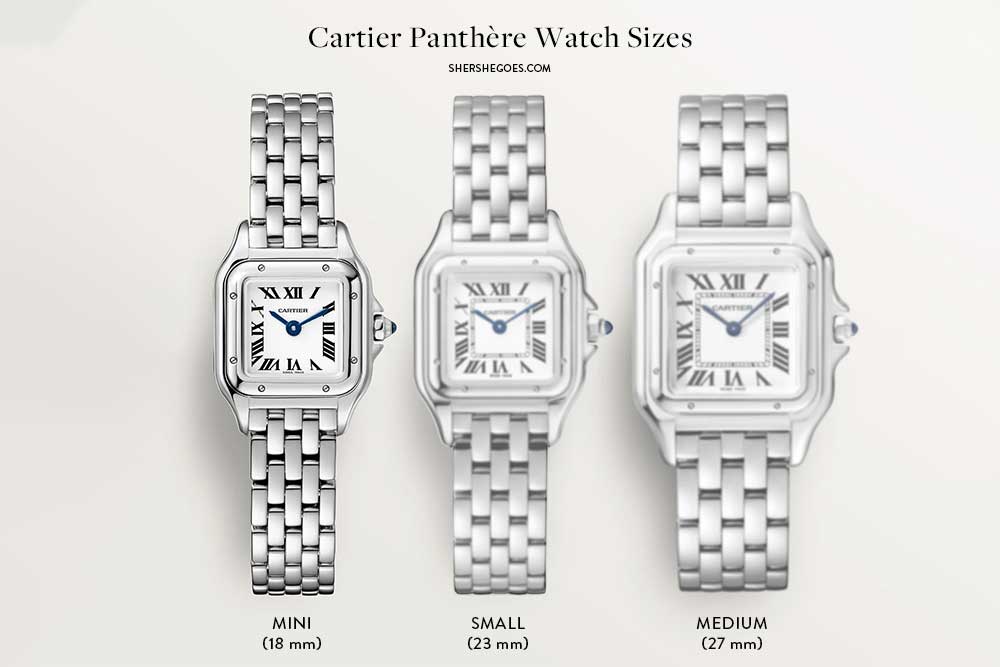 In the 2017 re-launch, the Panthère was available in just 2 sizes: Small and Medium. Cartier removed the large, perhaps signifying that the watch was to be exclusively for women.

Most recently, Cartier introduced an ultra delicate version, the Mini.

Today, you can find the Cartier in 3 sizes:

Depending on your wrist size, you might prefer the Panthere in one size or another!

Personally, I have very small wrists so I went for the mini. I always recommend trying on everything so you can see what suits you best! 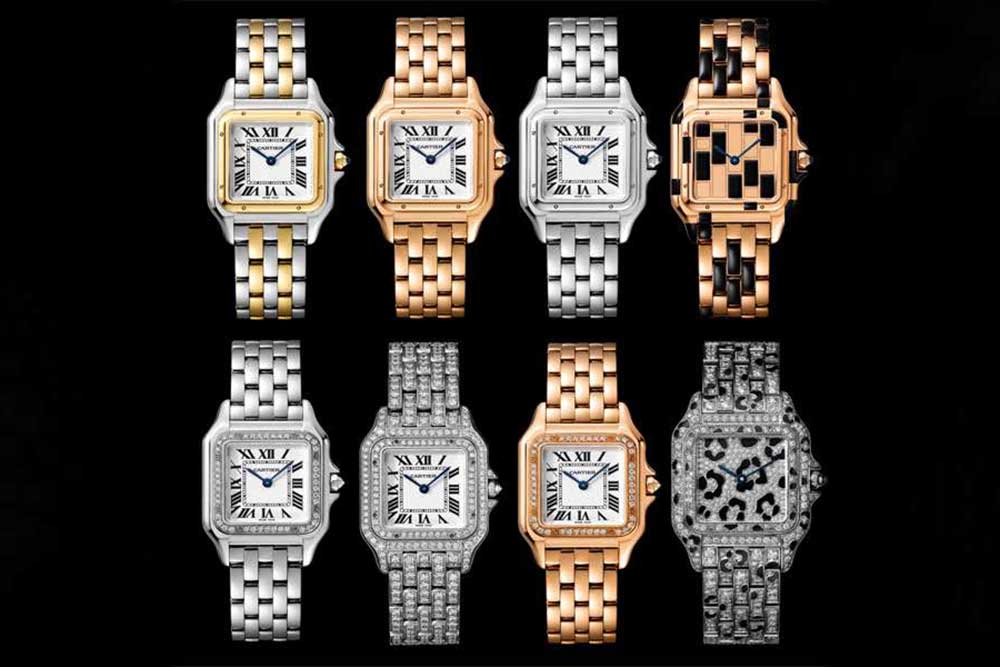 The original Cartier Panthere watch of the 80s was created in 2 styles: yellow gold and two-tone yellow gold with stainless steel.

Then, the line was expanded to white gold and an all-steel version before its discontinuation in the early 2000s.

When Cartier brought the new modern era of the watch back in 2017, they added rose-gold options to the watch.

Today, the Panthere is available in over 25 different styles including every color of metal. 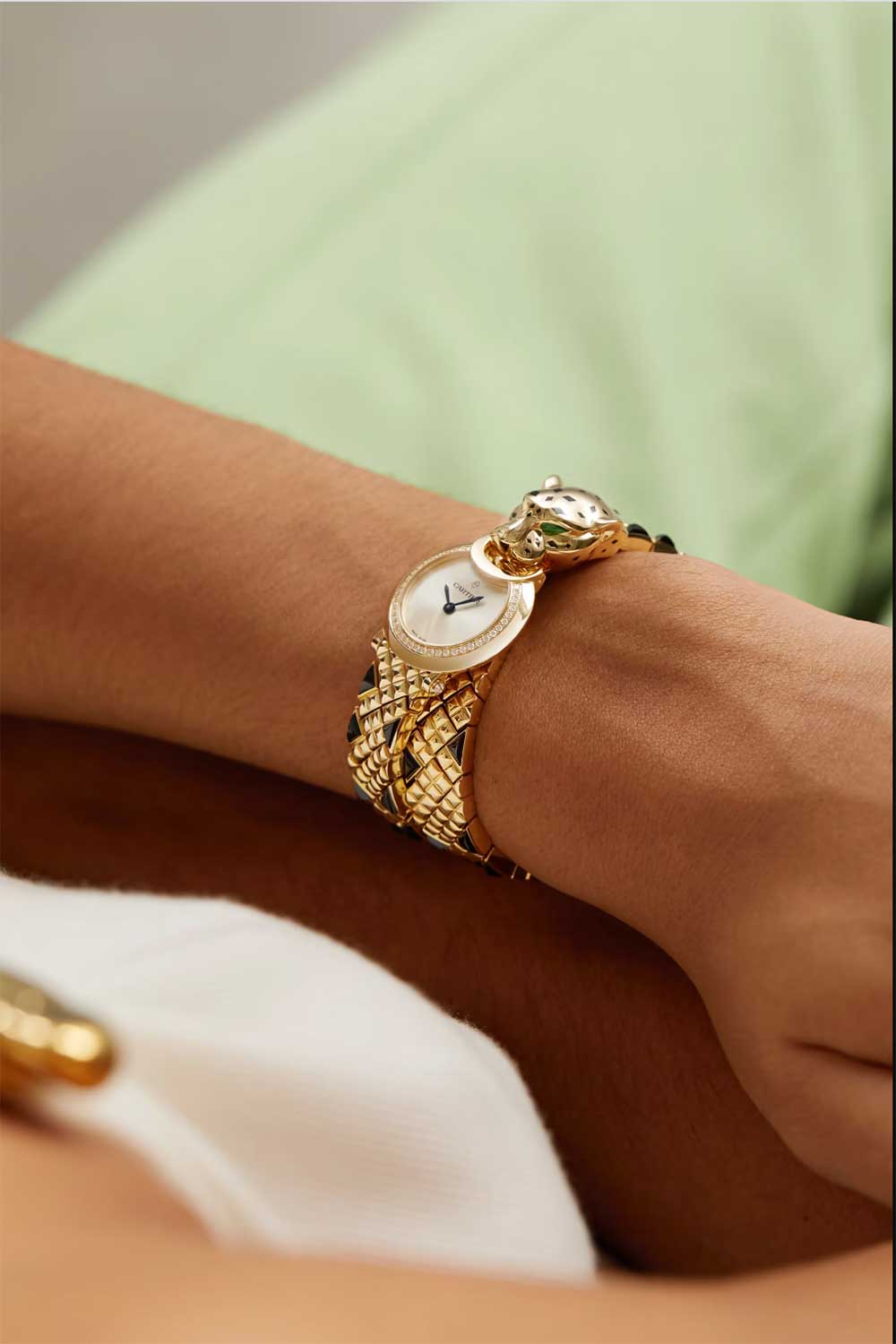 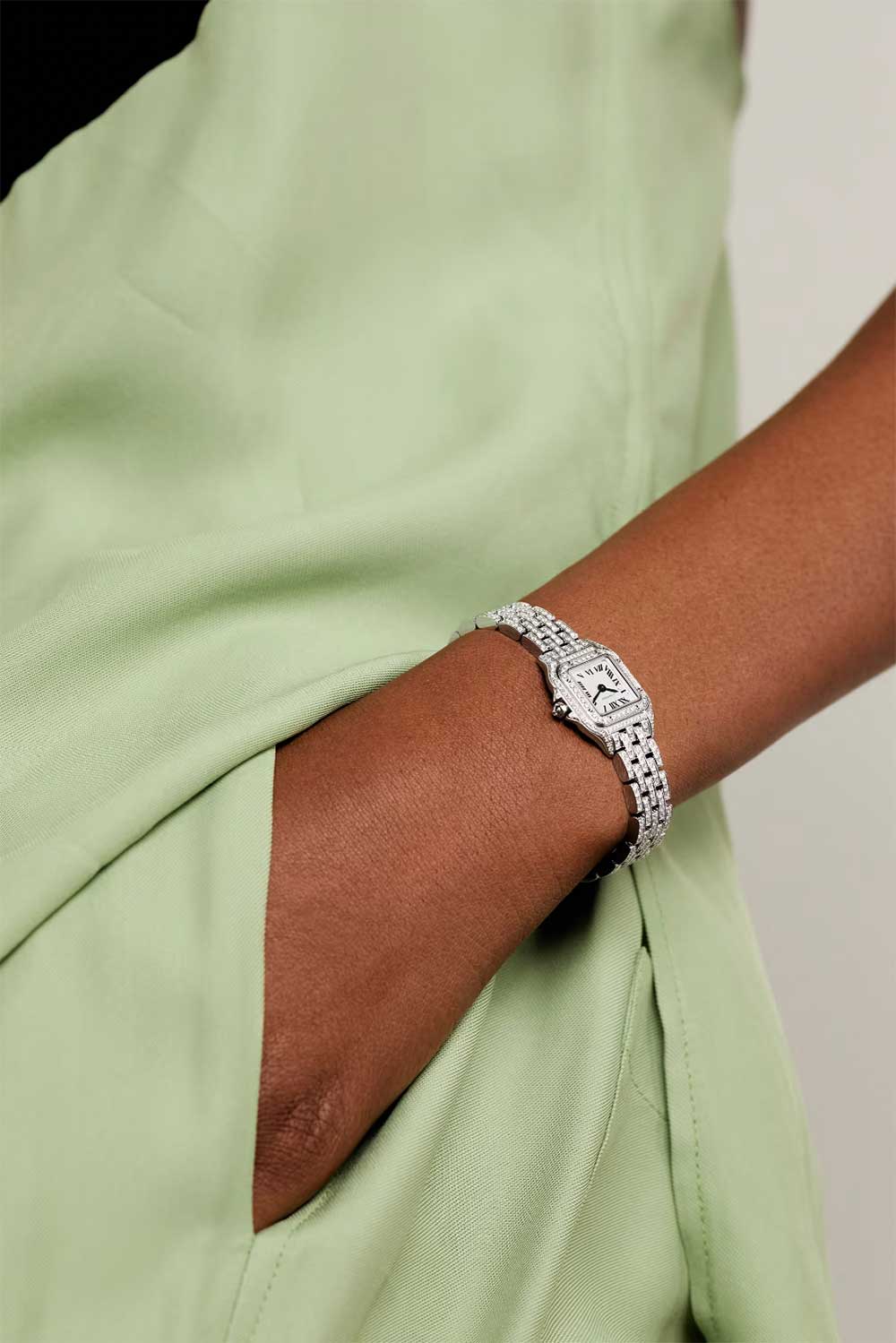 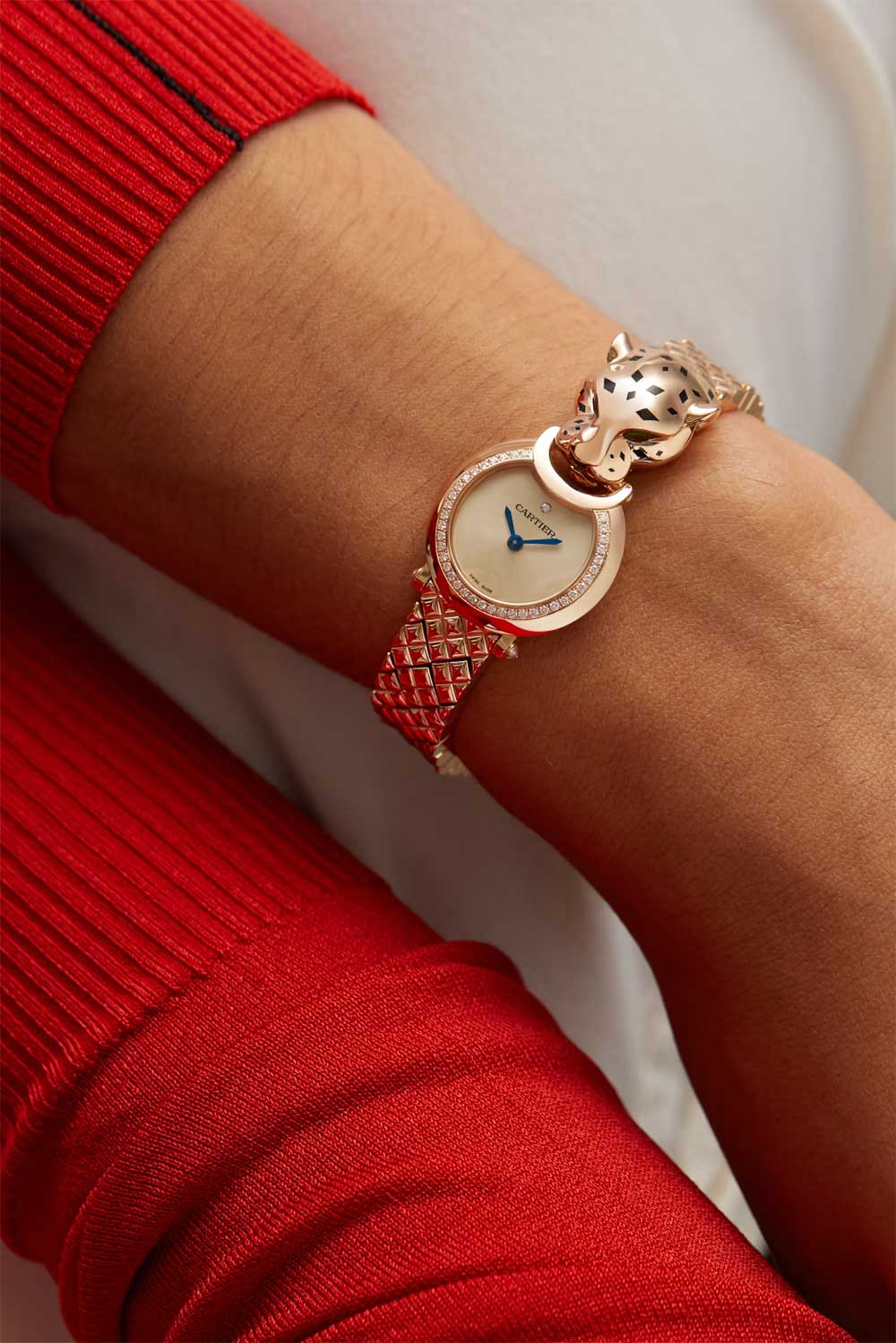 There are even models that directly evoke the spotted panther of the watch’s namesake.

If the current style you like isn’t available in store, check the secondary market for more options of the Panthere design.

Secondary market Cartier Pantheres can sell for significantly less than new watches, especially in the more expensive versions in full gold or diamonds.

For example, this two-toned vintage option is priced at nearly 50% of retail. 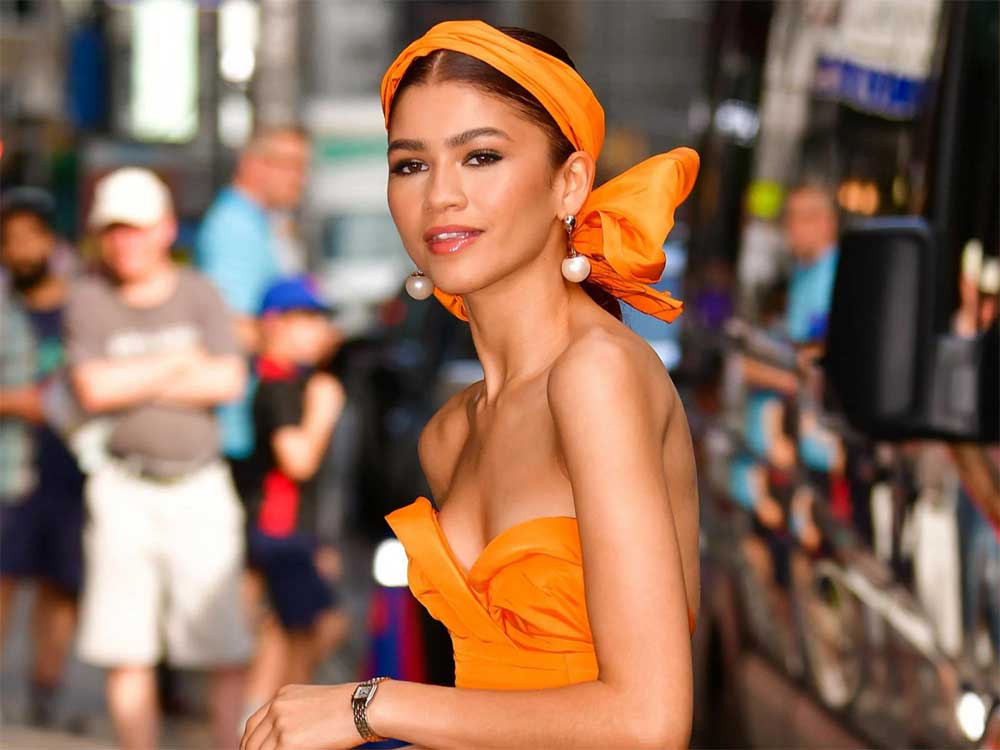 Since its re-launch, the Panthere has cemented its iconic status as the watch of choice for celebrities.

It’s been seen on everyone from Anne Hathaway and Kirsten Dunst, to Dua Lipa and Miranda Kerr. First Lady Jill Biden even sported a Panthere watch on Inauguration day.

Director Sofia Coppola is also a fan! (The luxury jeweler chose her to direct the inaugural watch video).

Old or new, the Panthere is an iconic mainstay to Cartier’s collection of timepieces.