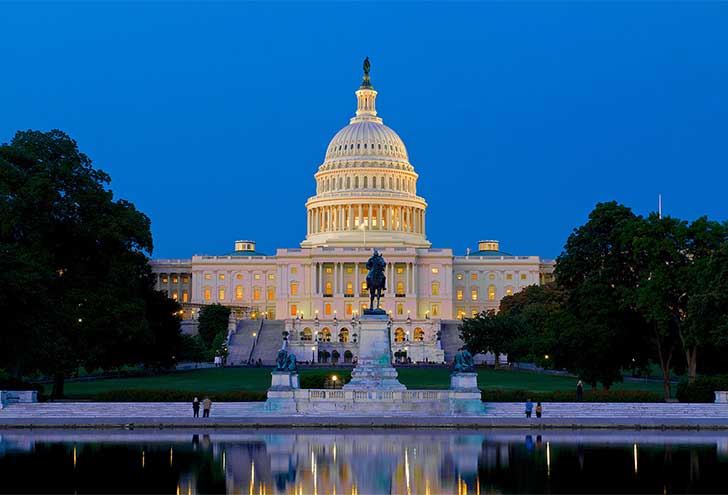 Where to Stay in Washington DC

Though long revered for its treasured tributes to the United States’ history and leaders, Washington DC is finding itself amidst a cultural and entertainment renaissance.

Sure, family trips to museums, monuments, and the cherry blossoms have been decades-old District staples, but with a newly released Michelin Guide for D.C. and a burgeoning entertainment scene, Washington is quickly becoming a hot cosmopolitan destination.

Keep reading for our favorite places to stay in Washington, D.C.!

To summarize, here’s a handy chart of our recommended DC hotels. All include free wifi and are known for comfort, good location and great customer service.

Below is more information about each hotel and why we recommend it! 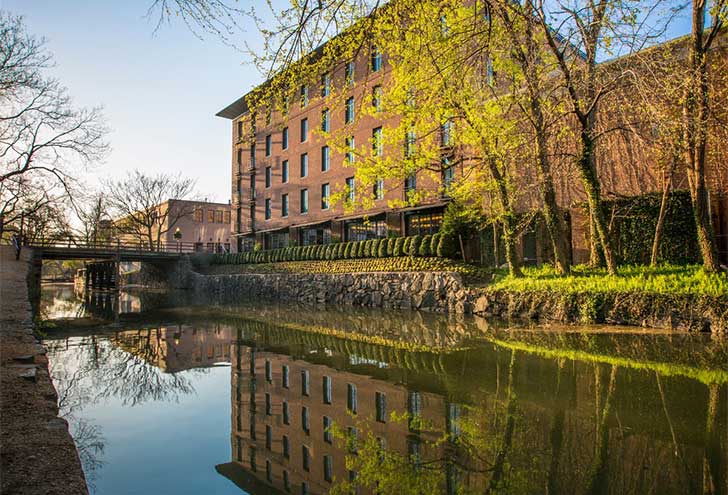 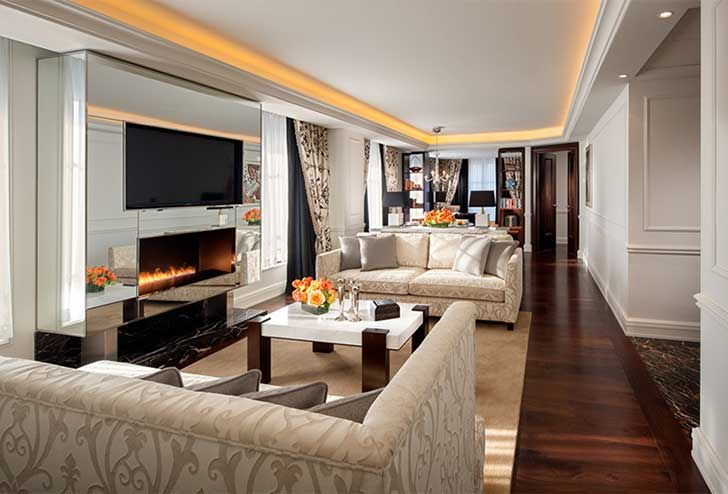 Located on the historic C&O Canal, the Rosewood offers guests 49 rooms among 12 suites with amenities such as working fireplaces, museum-quality art and china, rainfall showers (my favorite!) and above-ground bathtubs.

Having opened its doors in 2013, the Rosewood is a baby by D.C. standards, but don’t be fooled: the Rosewood offers every last luxurious detail that has made it one of the District’s hottest hotel choices!

What makes this one of the best hotels in Washington D.C.?

Picking the best thing about the Rosewood is like picking my favorite chocolate bar in a chocolate store, but one experience stands out above all the rest.

If you head up to the Rooftop Bar & Lounge, you’ll have access to amazingly cool indoor / outdoor swimming pool, great cocktails, and sweeping panoramic views of Georgetown University, the Potomac River, and the Washington Monument. What more could you want?! 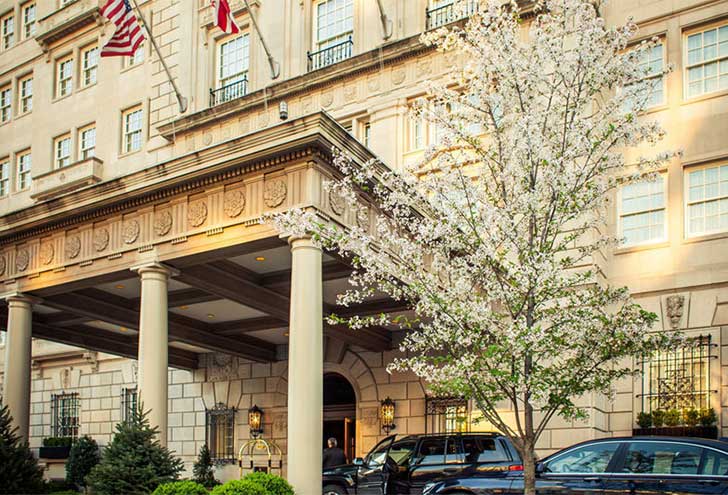 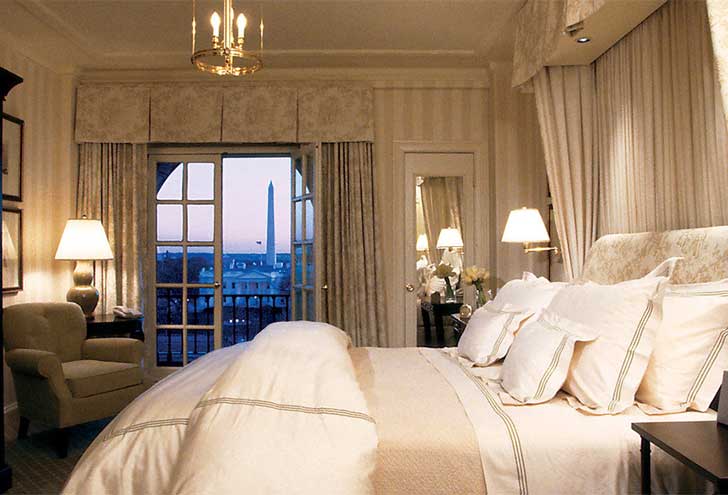 Nearly a century old, The Hay-Adams holds a prestigious spot in the upper crust of Washington hotels.

The Hay-Adams was originally designed as a residential mansion hotel, and when guests are exposed to the modern version’s European sheets, marble bathrooms, and fireplaces, they will see that the present of the Hay-Adams isn’t too far removed from its glitzy past!

What makes this one of the best hotels in DC?

You may not associate Washington, D.C. with stunning views, but have a stay at The Hay-Adams and you find your mind rapidly changing.

All rooms and suites have unobstructed views to either The White House, Lafayette Park, or St. John’s Church (commonly known as “Church of the Presidents”). Get ready to see the District in a whole new light! 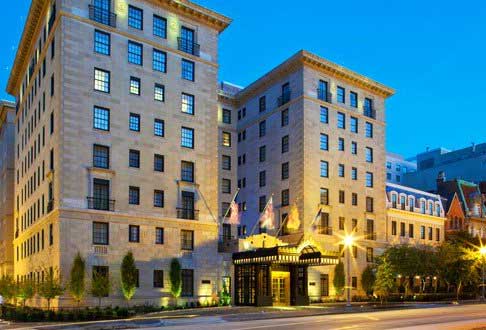 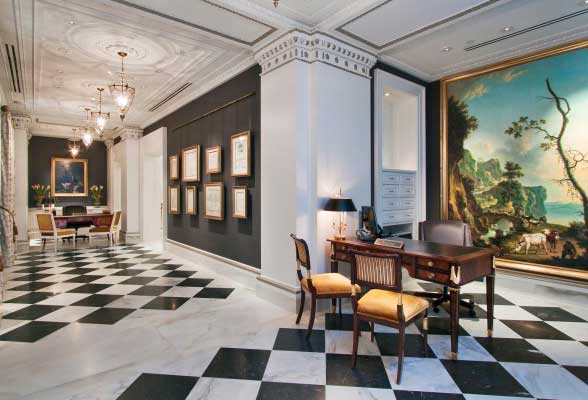 Fans of The Jefferson – with tongue firmly in cheek – often claim the hotel has the “second most prestigious address” (behind, of course, 1600 Pennsylvania Avenue).

A few glances around the marbled pavilion floors and silk drapes, however, and it’s hard to argue with these fans.

Converted from a luxury residential building in 1955 and fully renovated in 2009, the Jefferson truly deserves its prestige as one of the most luxurious hotels anywhere in the DMV.

What makes this one of the best DC hotels?

While may Washington hotels have a deserved reputation for being old and stately, The Jefferson doubly benefits from its rich history and recent remodeling.  The result?

All the luxury of an old Washingtonian hotel with modern amenities. My favorite places to stop at The Jefferson are the new petite spa and Plume, one of Washington, D.C.’s newly-starred Michelin restaurants! 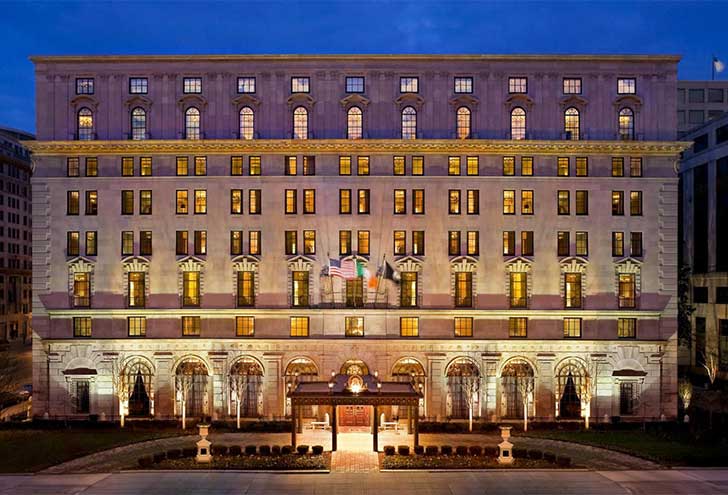 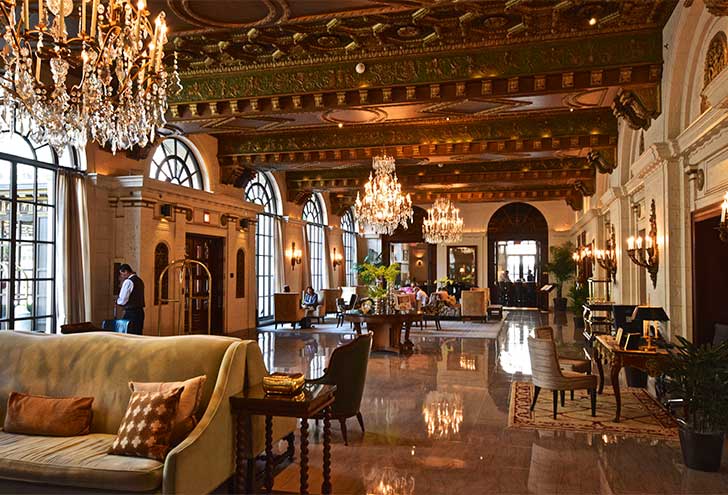 As you would come to expect from its name, The St. Regis Washington, D.C., like many hotels on the list, epitomizes old American luxury.

Whether it’s the onyx and marble bathrooms, fireplaces, stunning views of the Capitol, or nine different types of rooms and suites (some reaching 2,500 square feet!!), the St. Regis Washington D.C. is one of the District’s cannot-miss hotels.

Why stay at this DC hotel?

As brilliant as it can get inside the rooms, the St. Regis is deservedly more revered for the fun and decades-old traditions it has outside the rooms.

Whether you fancy afternoon tea, daily live jazz, or a fantastic, I-will-never-forget-this champagne sabering demonstration over dinner, you’re stay at the St. Regis will be one to remember! 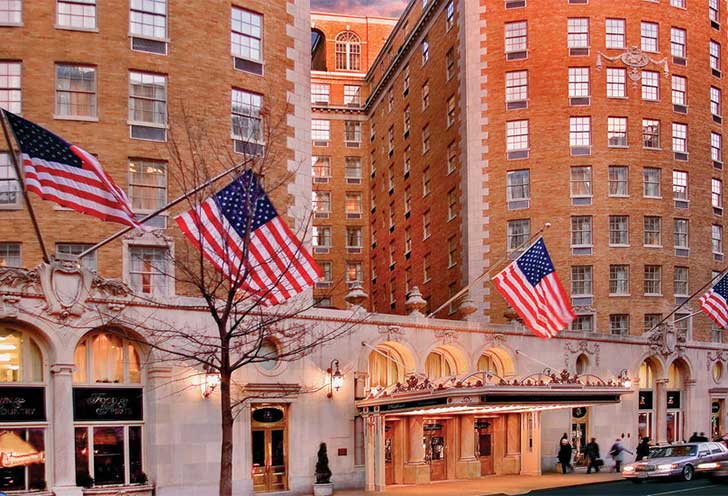 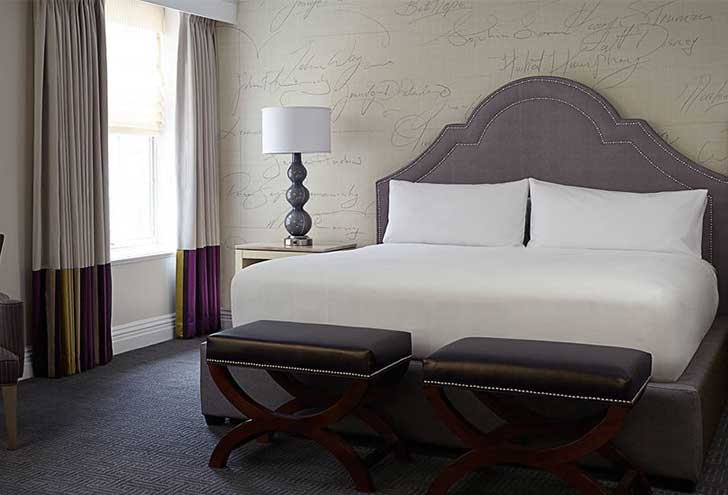 Tucked onto prestigious Connecticut Avenue in Northwest D.C., The Mayflower Hotel may be the most Washingtonian of all the hotels on this list.

Though upkeep at The Mayflower is famously attentive.

One step into the gorgeous ballroom, Edgar Bar & Kitchen, or any of the ornate guestrooms, and you might think you’re stepping back in time to the Roaring Twenties rather than stuck in the 21st Century!

What makes this one of the best hotels in Washington D.C.?

With its prime real estate in Northwest D.C., the Mayflower Hotel has one of the most unrivaled locations for any Washington hotel.

When attractions such as the Smithsonian Museums, White House, National Zoo, and Georgetown are all less than a mile and a half away, why would you want to stay anywhere else?

And that’s it! Our guide to Washington, DC’s top hotels to make the most of your stay.

Whether you’re looking for ultra-luxurious comfort, the best location in town, or no-frills budget cheap hotels, these top hotels in our nation’s capital are sure to please.